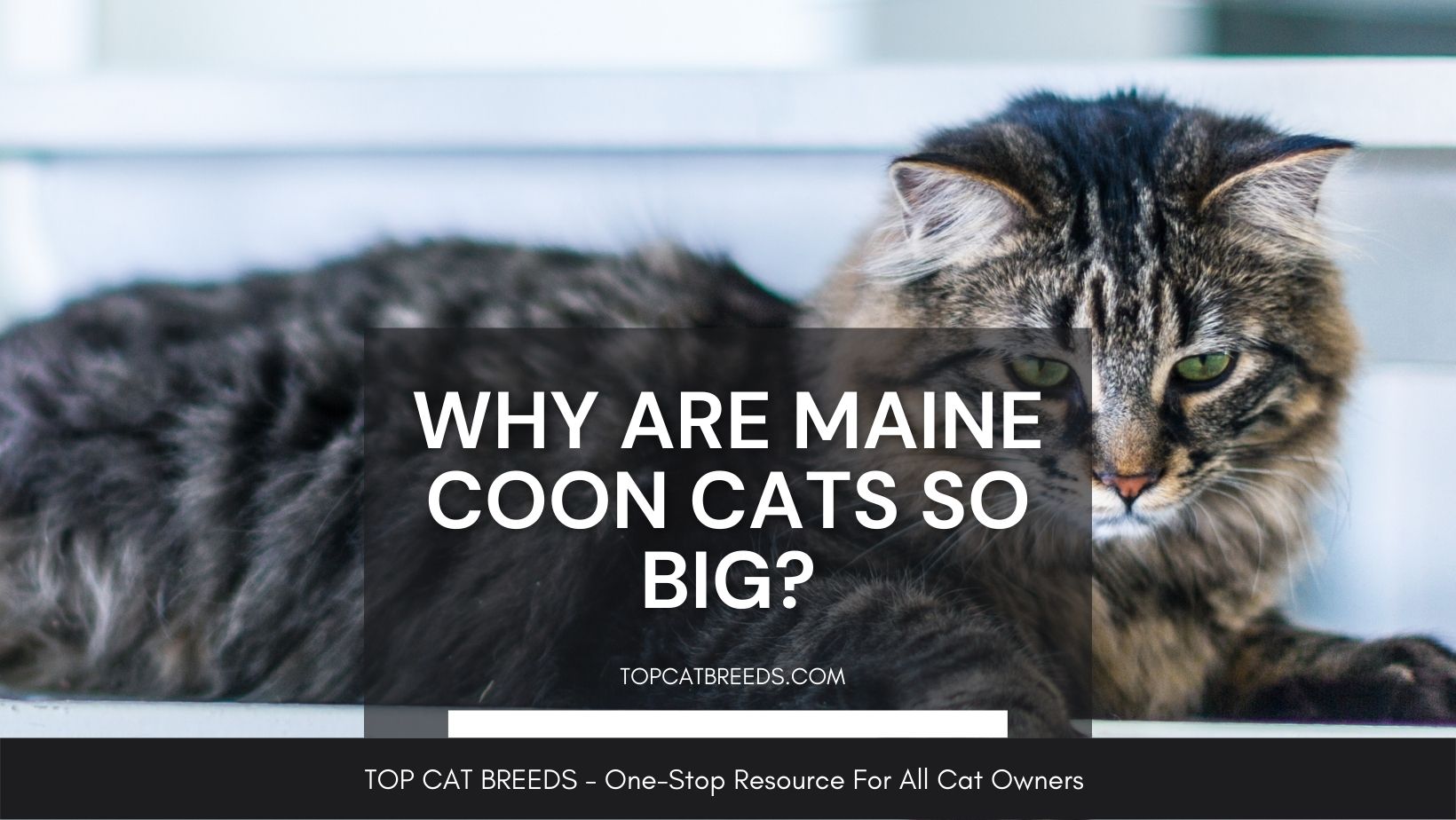 Large Maine Coon cats are known for their huge bodies and beautiful coats. They are also known for their outgoing and sometimes goofy personalities. This animal’s large size has been the subject of various studies. We figured out that its massive size was the result of its domesticated lifestyle. But the question is Why are Maine coon cats so big?

Slower development allows the Maine coons to develop bigger bones and muscles. Their large size is also because of their ability to hold more body heat. Although it is not yet clear if this theory holds true, it could mean that Maine Coon cats are big because of their environment. There are also many theories about the origin of the Maine Coon cats. Some of these suggest that they originated from the Norwegian Forest Cats and that they developed with local raccoons.

Even though we do not know what makes Maine Coons grow so big, There are a lot of things to know about Maine Coons, such as their breed and what to expect from them.

How Big Can Maine Coons Get?

The Maine Coon is considerably one of the biggest cat breeds in the world. With its regal looks and huge size, this large household cat is sure to catch the attention of everyone. Maine Coon is really big and is known for its large physical proportions.

This chart shows the expected size of a Maine Coon cat when it reaches its full size between 3 and 5 years old.

Why Are Maine Coon Cats So Huge?

Why are Maine Coon cats so big? It’s possible that their ancestry explains why they became so big, though it’s not clear why they evolved that way. Although we don’t know where these cats came from, it seems like they probably originated from a large wild cat.

It is also widely believed that huge Maine Coon cats came from the Norwegian Forest Cat. But, this theory may need further explanation and study whether Norweigan Forest Cats contributed to Maine Coon’s size. The size of the Norwegian Forest cats indicates that they need to be big to defend themselves and claim territory. As they evolved, their bodies were molded according to the environment.

Big Maine Coon Cats are well-equipped to live in harsh environments. It has large paws and long hair strands between its toes to keep its feet warm. It’s believed that the slow growth of Maine Coons allows them to develop strong bones and large muscles.

Most cats reach their full size around a year old while Maine Coons can grow to their full size in about five years. We can’t predict their growth spurts and we cannot say when they stopped growing. Sometimes, a cat’s body looks out of proportion. Although it can take a few weeks for Maine Coon to catch up with its growing bits, it can still grow into its original size.

Why Are Some Maine Coons Smaller Than Expected?

Maine Coons are big cats that require a balanced diet made up of protein and nutrients. When it comes to cat food, make sure it’s complete and doesn’t contain added sugars or fat. A Maine Coon’s growth can be affected by its environment and lifestyle.

It might be that it has been wild or it has been scavenging for food. It could also be that the diet is missing essential nutrients. If you’re planning on making your own cat food, make sure that the product is formulated to provide the right nutrients to keep your huge Maine Coon cat healthy.

Sometimes, a Maine Coon can’t reach its full potential due to its poor health. It can be treated successfully if it gets diagnosed and treated. If your Maine Coon is not growing correctly, it should be taken to your veterinarian immediately

When a kitten is smaller than the rest, it is considered a runt. It occurs when the cat is placed in the smallest part of the female cat’s uterus.

There are cases where the runts catch up with the normal size of the other cats, but they often remain smaller than average. So, this explains why some Maine Coon cats are smaller than expected.

What Is the Difference In Size Between Male And Female Maine Coons?

The Maine Coon is also known as the ‘American Longhair.’ Due to its popularity, it became the third most popular cat breed in the US in 2015. It’s also believed that this large household cat’s size and temperament make them incredibly popular among pet owners.

The male big Maine Coon is expected to grow bigger than its female counterpart. In terms of weight, this is evident by the following chart below:

Just note that these figures are just based on breed trends. In fact, there are some Maine Coon cats that reach their full size later than cats of the same breed. Also, there are some cats that quickly grow then stop at a younger age than others.

Can The Environment Affect A Maine Coon’s Size Growth?

Let’s find out the answer by comparing indoor cats and outdoor cats.

Outdoor cats are more active than indoor cats. They can eat more without gaining weight. For older cats with a larger body, it’s essential to provide them with the proper amount of food. Also, you can check with your veterinarian about the amount of food your pet should consume.

They don’t get much exercise, unlike outdoor cats. So, indoor cats tend to require less food. You may agree that it’s hard to tell if a Maine Coon cat is overweight, considering its thick fur. Many companies sell food cat food – especially for indoor cats – but you should be wary of these products since they can contain lower-quality of protein and fillers.

If you were talking about cats, then the biggest trophy would go to Tigers as they are a breed of cat. But, if we will compare domestic cats, like Maine Coon, then this breed is close to the top! We can’t say that large Maine Coon cats are the biggest, but that’s likely as some large breeds also reach the same size.

Sometimes, Maine Coon cats look bigger than other breeds due to their thick and long fur coats. Other cat breeds, such as Siberian cats and Ragdolls, can also reach the same size in terms of body mass, length, and weight.

Why are Maine Coon Cats so big? By now, you already have some idea why Maine Coon cats are enormous compared to normal cats. As we mentioned above, there are smaller sizes of Main Coon cats, and that happens for some reason, like genes and environment.

If you want to adopt a huge Maine Coon cat or you already have one, make sure to get them checked by your trusted veterinarian for better health and growth. Although a Maine Coon cat is large, it’s important to remember that this is still a family pet. Regarding taking good care of it, just make sure that you’re giving it the attention it deserves.