How Big Do Ragdoll Cats Get 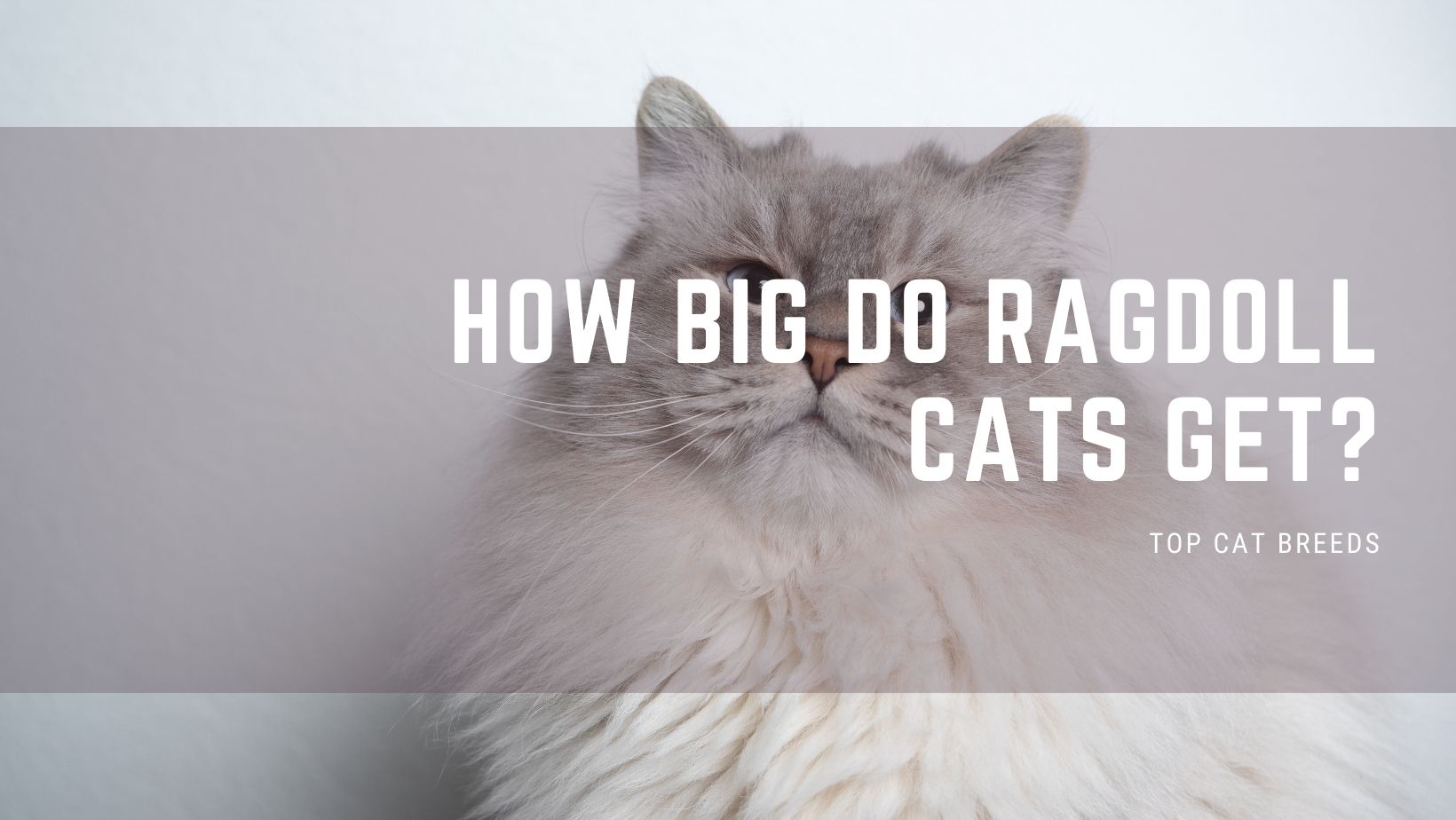 Ragdolls are a relative breed of cat which is stunning and beautiful. This breed was founded in the early 60s. The Cat Fanciers Association first registered ragdoll breed in the year of 1993. If you think about purchasing or adopting this kind of breed, you may need to consider some things – first is the size. So, how big do ragdoll cats get?

As a pedigree breed, they are also increasing in number and becoming a popular choice for a family-friendly cat. Before you decide to add a ragdoll cat into your home, some questions need an answer. You might be asking yourself about the ragdoll cat’s average weight and ragdoll cat size.

This question has been frequently asked by some owners of ragdoll cats because aside from the other breed of cats, there is one huge difference about the ragdoll cat breed, and it is their size. We are going to discuss that in this article. Let’s start!

The size could be the major decision you will make if you invest in a new house pet.

Especially when you have only a limited space or if your house is small. However, the average weight of the ragdoll cat will primarily depend on their gender.

The female ragdoll cats can be slightly smaller, and they can just weigh in around 8 to 15 pounds. Meanwhile, the other gender, the male ragdoll cats, can weigh up to 20 pounds once they are fully grown cats.

Whereas the typical ragdoll cat’s height can range from anywhere around 9 to 11 inches tall, but, then again, this depends on the gender of the mutual cat. The tall cats tend to be heavier, and the small cats tend to be lighter cats.

What Is The Length Of Ragdoll Cats?

If you are asking about the length of the ragdoll cat, you can just expect the ragdoll cat to measure around 17 to 21 inches, but you should not include their tails.

So if ever you want a Ragdoll cat, and you are used to a smaller size of cats, such as is the case for munchkins, or a Siamese, then the ragdoll cat size will exceed your expectations.

How Long Will It Take For Ragdoll Cats to Grow In Their Full Size?

The answer to that question is that the typical ragdoll cat will need about 4 to 5 years to achieve their full-adult size as they have a lot of growing to do.

For other people who want to buy a new breed of cat, this will be very interesting for them because the full-grown ragdoll cat is much longer than any other average household breed of cat, which could be as short as one and a half years to two years.

However, ragdoll cats are not capable of defending themselves against other bigger cats or predators. Because they have a calm temperament and calmness, they tend to avoid a fight at all costs.

Why Is My Ragdoll Cat So Small?

Some people who own a ragdoll breed of cat ask why my ragdoll cat is so small?

Well, you need to know some things if you want to have a Ragdoll cat breed.

The Ragdoll cats are so exquisite and cuddly in which anyone could immediately develop a love for them. These cats are not very active, so they can compete for being the best lap cat all over the world. Ragdoll cat sizes are generally shot up to be one of the largest in the world, but the question is, what if they are still so tiny?

Well, the ragdoll cat can still be small if they have not yet reached the age of one year. Some kittens tend to get their height in full in just around 2 to 4 years of age. There are times that the growth will be gradual or steady. However, it can also be sudden. If they do not grow even after around the 2 to 4 years mark, then they may be the runt of the litter.

Are runts really bad cats? Will the people make it sound?

Can the parasite cause stunted growth in the stomach of the ragdoll cats? You can explore these areas and more about ragdoll cats.

Why Is My Ragdoll Not Growing?

As you already have some idea how big do ragdoll cats get, you may be able to compare them to your existing cat or the cat you are considering buying or adopting. If the size doesn’t match, well, maybe it’s because of the gender, since male ragdoll cats are bigger than female ragdoll cats.

But, if it’s not the case, chances are, parasites are making your pet uncomfortable and unusual. If the ragdoll cat is smaller than it should be, there might be some health problems.

However, if you are asking, do parasites interfere with your ragdoll cat’s growth? The answer is no! The parasites do not have any hormonal effect on your cat and its growth. Whereas it is also not good for their overall health systems. The moment that your cat gets parasites in their stomach, then they would tragically suffer from problems with digestion. And if the problem gets longer, it would lead to their full poor growth and development.

Did You Feed Your Ragdoll Cat Correctly?

If you own a Ragdoll cat, you need to feed them more frequently than common cats. Feeding your ragdoll cat frequently is necessary to get their overall growth and development. Just in case you are thinking of feeding them with cat food, like to go with a BARF diet. Their meal should have at least 75% of wet food together with another 25% of dry food.

The ragdoll cats are supposed to be on a carnivorous diet. Whenever you see your ragdoll licking its bowl right after its meal, then it obviously means that you are feeding them less than the original number. And if you ever observe that your ragdoll cat is suddenly leaving their bowl right after their meal, then it just means that you are overfeeding them because ragdolls tend to be overfeeding themselves as long as they have food on their side or whenever they see a portion of food to eat.

However, the only thing that you need to look out for is, when you see them licking their bowl, you need to fill it again, but if they are mostly done eating, then you should not overfill their bowl where it can lead to overfeeding. In fact, these simple things may affect their health and their growth, so if you’re considering this type of breed, then you need to know all of it!

You may also be interested: Best Food For Your Ragdoll Kitten

Is There A Chance Of A Ragdoll Cat Being A Runt?

In general, the runt is distinguished as the smallest or the sickly one of the litter. Not every veterinarian doctor agrees on just one definitive meaning of a runt. Some are too sickly to feed themselves and are mostly ignored by their own mothers, but with enough care, love, and attention, they can grow without their flaws.

Can A Ragdoll Cat Have A Frequent Medical Issue?

If you are sure that the ragdoll you are petting is not going to grow up to a possible normal stage, then you can expect your cat to have stunted growth.

Stunted growth would also mean that one or some of their organs could be compensating for the loss. Most of the time, a few organs can stop functioning on a normal level. If you do not want this to happen to your ragdoll cat, then you just have to make sure to visit a veterinarian doctor regularly and get some statistics about the health of your ragdoll. This might give them a fair chance at life and love. You should not ignore any kind of signs of illness, abnormality, or weakness.

Most pet owners are getting interested in adopting or taking care of Ragdoll Cats. Well, it’s understandable as Ragdoll cats are very beautiful, cuddly, and sweet. But, before taking them into your home, you need to know the facts about ragdoll cats, especially their size.

Can Cats Have Honey?