Why Do Savannah Cats Chirp? 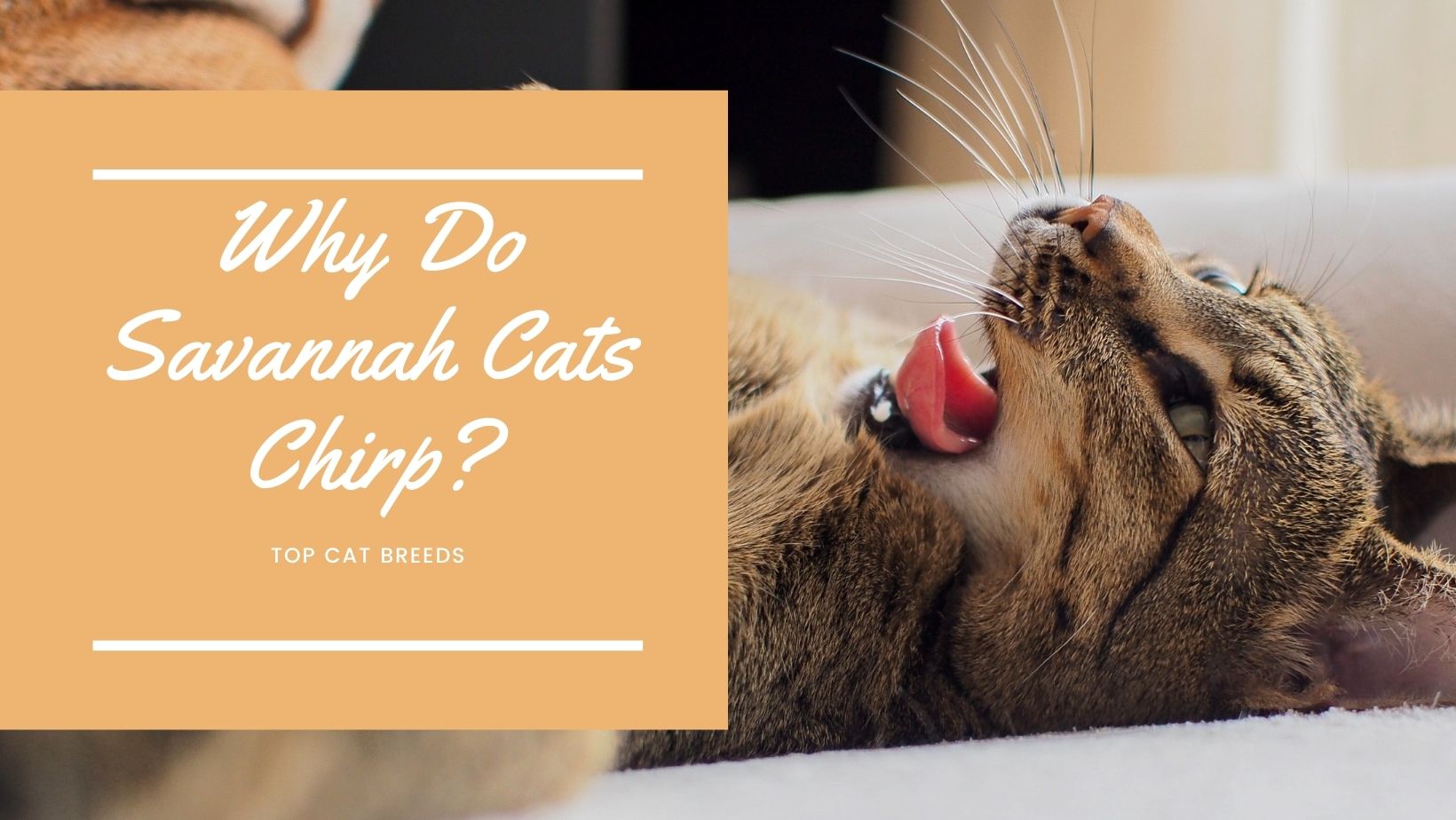 Because of a Savannah cat’s bloodline, you can really expect the unexpected out of them. There are some times when they act too wild to be considered domestic cats. Other times, they’re too calm for people to even notice that they have Serval blood.

So far, one of the most distinct behaviors that you’ll notice in Savannah cats is how they communicate. Unlike other felines, they don’t just meow. They also tend to chirp in many instances. You will surely find a lot of videos of this on Youtube and other social media sites.

That said, why do Savannah cats chirp? Is there a reason for this, or it is just another wonder that cat owners have to live with? This is what we’re going to find out in this article.

What Does Chirping Mean For Savannah Cats?

To start, why do Savannah cats chirp? There are actually a lot of possible reasons and meanings behind the sound. It will depend on what the feline currently feels, and what environment they are currently in.

For reference, here are some of the most common instances that may cause Savannah cats to chirp:

1. Your Cat Is Excited

More often than not, cats chirp mainly because they feel excited. This may happen if happen to see animals that they like or are simply new to their eyes. For instance, some owners said that their Savannahs chirp enthusiastically when they get to see birds, both near and far. The same thing can happen if they see cats and dogs that they have a bond with.

These excitement-found chirps are also common if your Savannah cat is in a new place that feels comfortable for them. Take, for example, pet parks or vast fields where they can explore. This is probably not the case for introverted felines, though.

Savannah cats are needy. They are great attention seekers, and they want to be frequently noticed by people, especially by their owners.

Hence, if they feel ignored or left out, it’s 100% guaranteed that they will chirp for the sole purpose of getting your attention. They won’t stop until you do, so make sure to recognize them by talking to them, petting them, or playing with them for a while.

For those that think this is the case between their cat and them, you should consider giving your cat toys or another companion. Doing so will help them have other ways to entertain themselves.

3. The Savannah Is In Predator Mode

A Savannah cat’s chirp, no matter how cute and lively it may seem, may sometimes be an indication that they’re going into predator mode.

This situation may happen if they happen to see worthy prey, like a bird, mouse, or fish. The sound may be them preparing themselves to be more alert in terms of catching whatever they saw.

If this is the case, the feline’s chirps are usually mixed with stress. This is most especially if they can’t catch their prey for whatever reason. One common reason involves the prey being far away from where they currently are.

4. They Are Trying To Tell You Something

There are some instances when the chirp of a Savannah cat is used for communication rather than a simple expression towards a certain situation.

This may be the case if the feline is hungry, thirsty, or is generally concerned about something. They may use their loud chirps as a way to tell you that it’s time to feed them or they need to have their water bowls refilled.

Another thing, their chirps may also be their way of saying that they want to play and spend time with you. You can easily figure out what they are trying to communicate by observing their current condition.

This is a little uncommon, but if the sound of your Savannah’s chirp comes off a little worrying or alarming, there’s a chance that they feel threatened about something. It can be because of another animal lurking around, or they are in an environment where they feel unsafe.

Whatever reason it is, you should definitely try to check up on your cat, and comfort them to ease their threatened feeling. It can also be a way for you to keep track of your surroundings if ever there really is danger around both of you.

Should I Be Worried If My Savannah Cats Chirp Frequently?

It’s actually common for Savannah cats to chirp a lot. This is most especially if they are confined indoors, and are unable to get out for any reason.

Because of this, in general cases, you shouldn’t necessarily be worried when it happens. Simply check up on them to see if they need anything or they are specifically curious about something.

On the other hand, if they look like they are in pain or they look weak, then that’s the time that you should get worried. Take them to the vet as soon as possible to know if there is any kind of health issue that you need to fix.

What Are The Other Sounds Savannah Cats Make?

Chirps are not the only sounds that Savannah cats can make. Depending on the situation, they can also produce various other sounds to deliver their message. Here are some that you can expect:

A Savannah cat’s purr is usually tied to positive situations. This usually means that they’re in favor of the situation, and, thus, they’re comfortable enough to display vulnerability to the people around them.

This isn’t always the case, though. You should still assess their body language to see if their purrs mean otherwise. Sometimes, it can also be an indication that they feel pain or anxiety.

Read also: What Does It Mean When A Cat Purrs Loudly?

Another sound that you may hear from your Savannah cat does is a hiss. More often than not, this is an indication that they are angry, uncomfortable, and anything else that means they want to be left alone. If they hiss towards a person or animal, then it’s best if you ensure that you can calm them down as soon as possible. Distancing them from whatever angered them is also a must.

Of course, regular meows are given even for Savannah cats. What made this particular sound distinct for the breed is their tendency to produce loud and recurring meows. They are actually known for this, and usually becomes their signature in being communicative felines.

Some common reasons why they may meow loudly include wanting to seek attention, alerting their owners for possible threats, signaling that they need something, and likes.

Similar to hissing, the growls of a Savannah cat aren’t particularly a good sign. It usually stems from territorial behavior because they usually produce the sound as a warning to both the people and animals that invade their space. It can also be caused by their strong instinct towards danger.

A Savannah cat’s yowl usually happens when they are in heat. They can also do this when they don’t feel particularly well, either in terms of their health or their surroundings. Either way, the sound isn’t really a good sign. If this becomes alarming because of the former reason, then you may want to consider getting them spayed or neutered.

Note that the yowling becomes more common as they grow older since it’s also a sign of constant mental confusion.

Read also: Will Neutering Calm My Cat? Find Out Here!

To wrap it up, why do Savannah cats chirp?

Like any other thing that cats do, there’s a reason why Savannah cats chirp. It’s usually because they’re excited or particularly interested in something. In some other instances, they may do this because they want something from you. You need to observe them properly if you want to know the exact cause of their chirping.

Now, you don’t necessarily have to be worried when your Savannah cat chirps. This is unless they seem to be in pain or a lethargic mood. Otherwise, it’s perfectly normal behavior for the said felines.