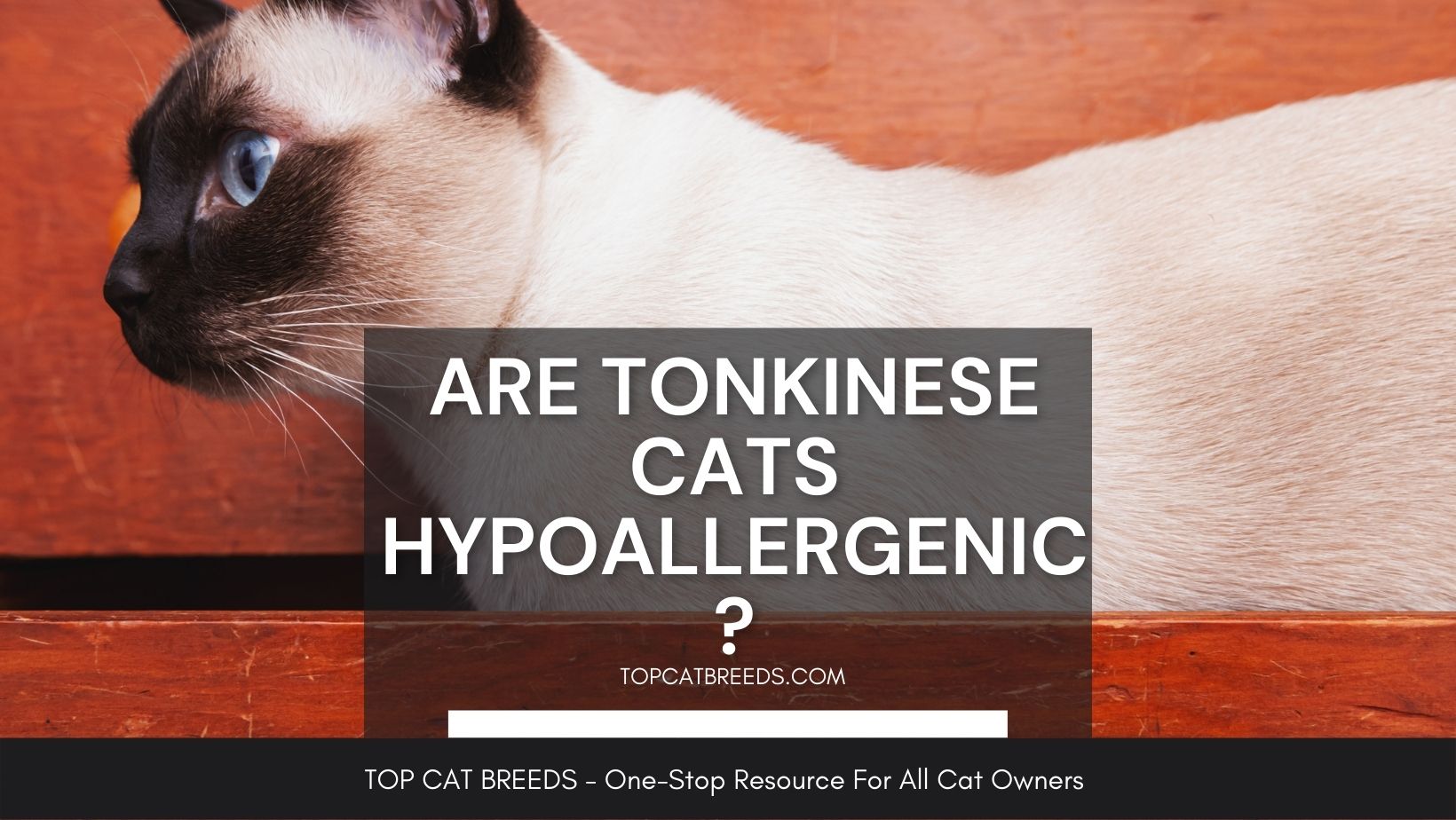 Tonkinese cats have the combined cuddly and short-haired qualities of Siamese and Burmese cats. This breed is well-loved, not just because of how cute they are, but also because of their naturally loving personality.

If you’re allergic to cats, however, you may be taking second thoughts about owning a Tonkinese. You specifically need to look into hypoallergenic cats. These are felines that produce less allergen than others, which makes them a good fit for those suffering from allergies.

Now, are Tonkinese cats hypoallergenic? Is it safe to be owned by people who are allergic to cats or fur in general? This is what we’re going to find out in this article.

Tonkinese cats, or simply Tonks, are considered hypoallergenic under general standards. This means that, more often than not, its fur and overall physical qualities won’t trigger your allergic reactions.

However, you need to know that cats can’t be fully hypoallergenic. This goes the same for Tonkinese cats. Although they have short fur, they still produce FEL D1. If you don’t know yet, FEL D1 is the primary allergen in domestic cats like the breed at hand. The breed is just usually categorized as hypoallergenic because they produce the said chemical at relatively lower levels.

To sum it up, are Tonkinese cats hypoallergenic?

The Tonkinese breed can be characterized as hypoallergenic cats, but they are not entirely free from allergens. No cat truly is. They need maintenance in terms of grooming to ensure that they will stay non-threatening for people with allergic reactions to cat fur.

What Are The Factors That Will Affect FEL D1 Production In Tonkinese Cats?

In the previous section, we talked about how FEL D1 affects the number of allergens that a cat’s body produces.

Another thing that you need to know about this is it’s not the same for every cat. Some produce more than others, while some have less in their bodies. If you’re allergic to them, then the obvious path to take is to look for cats that produce lesser FEL D1.

For reference, here are the factors that you should take into account:

Male cats produce more FEL D1 through their skin compared to female felines. The former’s allergen production can be three times more than the latter. That said, you may want to opt for female Tonkinese cats if you’re going through related allergic reactions.

Kittens are guaranteed to produce a lower level of allergens compared to adult cats. This may explain why your allergies only develop at a later time when your cat reaches full adulthood.

Because FEL D1 is secreted mainly through the feline’s skin, smaller cats tend to have fewer allergens than larger cats. Since Tonkinese cats are medium-sized, expect that their allergen production is somewhat on the middle level if their skin is considered.

Cats with darker body or coat colors tend to have higher FEL D1 production than those that come in lighter colors. There is still no fixed and accurate explanation for this, but countless scientific evidence supports this statement.

That said when looking for an allergy-friendly Tonkinese cat to take care of, opt for those with colors like point lilac and fawn. You can also look for those whose coat is mixed with the lighter color being the majority. It’s also best to avoid solid seals since this comes in a dark brown color, making them produce more allergens.

Male and female cats that produce more sexual and mating-related hormones also have more FEL D1 on their bodies. Those that are either spayed or neutered, on the other hand, tend to produce reduced or more neutralized allergens.

What Kind Of Tonkinese Cats Are Most Hypoallergenic?

Considering the specifics in FEL D1 production in cats, it’s safe to say that female, light-colored Tonkinese cats will produce the least allergens, and, thus, they’re considered the most hypoallergenic. Having a spayed female Tonk may be even better.

Note, though, that there are more factors that you wouldn’t be able to control when it comes to FEL D1 production. These include their age, size, hormones, and sexual status.

Can A Tonkinese Develop Allergies?

Similar to any other cat breed, a Tonkinese cat can develop allergies to certain things and foods. This can happen no matter how good you take care of your feline friend. Some allergens to look out for include gluten, dairy, and dust. Even then, you can expect the most random things to trigger possible reactions.

If you think your Tonkinese cat is having allergies to something, it’s best to prevent them from coming in contact with the said substance, and bring them to the vet for consultations as soon as you can. Doing so will help take immediate action towards your cat’s potential issues.

Do Tonkinese Cats Shed A Lot?

Tonkinese cats don’t shed a lot. Because of their naturally short-furred coat, you can rest assured that you won’t have problems with finding scattered hair everywhere. Similarly, this means that you will not have to worry that simply touching your furniture won’t give you serious unforeseen allergic reactions.

Another advantage of having low-shedding felines is the lesser need for constant grooming. They are not prone to matted fur, and, thus, you won’t have to bring them to the groomer’s twice a month or even more often than that.

Keep in mind that despite Tonks being a low-maintenance cat, they still their fur to be regularly brushed. You can do this by yourself using fine-bristled brushes.

How To Groom A Tonkinese To Reduce Allergens?

How you groom your Tonkinese cat will play a big part in how much they can trigger allergic reactions. This is true even if the breed is not that demanding when it comes to taking care of their coat.

That said, here is a guide of what you should know in grooming Tonkinese cats and similarly reducing their allergen production:

Regularly brushing your cat will help you take better care of their loose fur and constant shedding. Doing so will let you keep a close look at the condition of their fur and skin. Ultimately, this will also result in a more managed home, and an overall allergy-friendly environment.

You should consider brushing your Tonk either every morning or every night. You can also do it at both times if you can. Choose a good brush while you’re at it to fully make the most out of the activity.

Even though Tonkinese cats have naturally short fur, you should still have their coat professionally trimmed seasonally.

You can do this every month if their fur grows quickly, or only when it’s the summer season. Either way, it will help you prevent dealing with oversensitive allergies. It can also be beneficial to your cat since they won’t have to deal with issues like matted or tangled fur.

Keep in mind that we’re only referring to a short trim and not fully shaving your cat’s fur. The latter can be harmful to your feline’s health and wellbeing, so it’s best to avoid it.

It’s rare, but some cat scratches can contribute to allergic reactions. Because of this, it’s best that you cut or trim your Tonk’s nails every 2 to 3 weeks. Doing so will also help you prevent yourself from getting deep and stinging scratches.

So, are Tonkinese Cats hypoallergenic?

The answer is yes. Tonkinese cats are hypoallergenic, but not 100%. Like any other feline, they still pose a risk of triggering allergies, although low. Fortunately, because of their short coats, you won’t have to worry if your condition isn’t overly sensitive. You just need to ensure that they are properly groomed at all times.

Note that the specific level of how triggering a Tonkinese cat’s allergens are will still depend on several factors. It’s still best if you test how you will feel near one before fully committing to taking care of the feline.

Read this too: Are Bengal Cats Hypoallergenic?

Why Does My Cat Avoid Me?

Why Do Savannah Cats Chirp?