Do Siamese Cats Need A Companion? 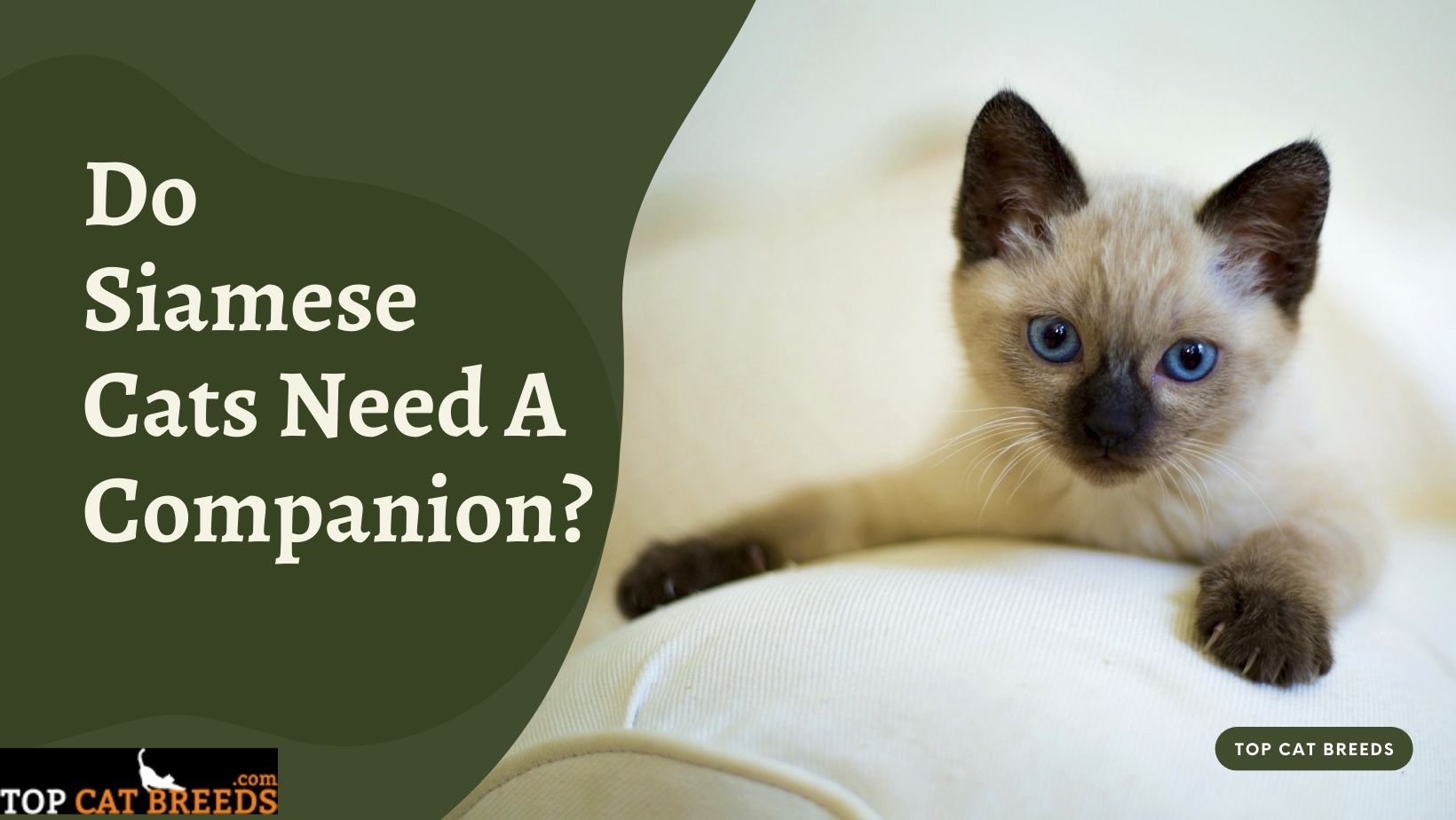 Getting a Siamese cat is a perfect choice if you want a feline that is naturally sociable and affectionate. Not to mention, they are very low maintenance when it comes to their needs. They have short coats, and so there’s no need for frequent grooming.

Probably the only issue that Siamese cat owners will have is the struggle in giving the amount of attention that the felines need. If you don’t know yet, Siamese cats are attention seekers. It can be hard for busy bodies to fully cater to the breed’s needs.

To answer the question, “Do Siamese cats need a companion?”, they do. Whether it’s a person or another animal, they should always have someone around in case they seek attention, cuddles, or playtime.

So, what other reasons are there for why your Siamese cat needs a companion? See below:

The Siamese breed is a bunch of extremely outgoing cats. Expect that they will want to play and bond with whoever they see whenever there’s a chance. Because of this, it’s easy to say that Siamese cats see social interaction more as a need rather than something they can live without.

Siamese cats don’t just want to simply interact with others. They live to catch attention, whether it’s from their owner or the other animals that they’re with. If they feel like they are being ignored, they will feel lonely, and eventually sulk. They may display negative behavioral issues like not eating, chewing on things, and likes.

The Siamese Breed Needs A Lot Of Stimulation

Cats, in general, need physical and mental stimulation in their daily lives. However, Siamese cats have relatively higher needs for this aspect. They need to have something to work and focus on to keep their minds active. Note, though, that they won’t be able to do this without companions. They need someone to play with for their exercise, and so on.

The Feline Is Prone To Attachment Issues

It’s normal for cats to be loyal, and attach themselves to their owners, but Siamese cats can actually form attachment issues over time. If you’re not around, and they have no one else to turn to, there’s a chance that they will react negatively to it through excessive meows and cries.

You should give your Siamese cat a companion simply because they don’t like being alone. They don’t enjoy it, and they will usually throw tantrums as a response.

Although some say that you can leave them at home alone for 48 hours maximum, but realistically, your Siamese will already be lonely after eight hours of being on their own.

Siamese cats cannot live alone. This may seem like an exaggeration, but it just isn’t possible. Moreover, even if they do survive living alone, it won’t last long. They also won’t be emotionally and physically fulfilled.

Here are some other things that may happen if you leave Siamese cats to live on their own, or even leave them alone for more than a day:

The Cat May Get Anxious

If you leave your cat alone often, and for long hours, at that, there is a chance that they will develop anxiety.

If this happens, they will not only be affected mentally, but their physical condition can also worsen. Your cat may experience frequent vomiting, trembling, lethargy-like behavior, and a lot others, all because of the absence of human and/or animal presence around.

The Siamese May Develop Depression

Apart from anxiety, leaving a Siamese cat alone can also be a reason for them to develop depression. This is one of the worst things that can happen to them because there is little to no chance for them to recover. It will take a combination of medications, emotional therapy, and continuous solutions to do so.

Your Siamese May Try To Go Out

It’s actually normal for healthy Siamese cats to go out once in a while. However, if they go out after feeling neglected for a long time, they may permanently leave home to try and look for social interactions outside of the area. This can be troublesome, especially for felines who aren’t used to exploring.

Do Siamese Cats Get Along With Other Cats?

Siamese cats can get along well with other cats. In fact, they are probably one of the friendliest cat breeds around. This is mainly because of their affectionate, loving, and extroverted nature, that they find it easy to interact and bond with others. This also applies to dogs, and other animals, in general.

Another thing about Siamese cats is, because of their high requirement for physical stimulation, you’ll usually find them wanting to play with anyone who is willing to. They also show off their laid back attitude if ever they run out of energy, which is a plus for felines who are more on the chill side.

What Are The Cat Breeds That Can Get Along Well With Siamese Cats?

Although a Siamese can bond with almost any cat, it will still be best if you take compatibility into account. In general, sociable cats, like the Siamese breed, get along well with equally sociable felines. There are many other factors to consider, but you can start by identifying the most workable breeds.

To help you with this, below is a list that you can refer to:

Ragdolls and Siamese cats are probably one of the best pairs you can have in your home. This duo is somewhat chaotic since they both match each other’s high level of playfulness and friendliness. Since Ragdoll cats are more independent, they balance out the neediness of Siamese cats. Similarly, being with each other will help them get the stimulation that their minds need.

Read also: Ragdoll vs. Siamese Cats – Understand Between These 2 Breeds

Persian cats, unlike Siamese cats, are on the calmer and gentler side. However, the two will get along well because of their same affectionate and loving nature. They are best for fulfilling your Siamese cat’s emotional needs, while your Siamese cat will be the answer to your Persian’s physical stimulation.

Maine Coons are almost identical to the characteristics of Siamese cats. Both have laidback and sociable personalities, which make them very compatible with each other. Maine Coons also find it easy to adjust to a new environment, which is a bigger plus.

Read also: How to Take Care of a Maine Coon – Your Guide

Because of a Sphynx cat’s communicative nature, you can expect that they will find it easy to get along with your Siamese, and vice versa. Both of the said breeds are also known as two of the most loving group of felines.

Similar to the previous cat breeds, Bengal cats also share a lot of similar traits with a Siamese cat. Note, though, that introducing them to your Siamese cat will need the proper buildup. Their relationship will have a higher chance of working if the Bengal cat comes after the Siamese because of the former’s territorial personality.

Read also: Do Bengal Cats Get Along With Other Cats?

Although Tonkinese cats are known for being a bit stubborn, they get along with other cats just well. This applies largely to Siamese cats because of their naturally active lifestyle.

How To Introduce A New Cat To A Siamese Cat?

No matter how compatible you think your new cat is with your Siamese, there are still a few things that you have to remember when introducing them to each other. This is necessary for your feline friends to be in the right headspace and adjust properly without being aggressive, stressed, and likes.

Here are some ways on how you can properly go through the introduction process:

Make Them Familiar With Each Other’s Scent

Cats familiarize themselves with each other through their scent. Because of this, it’s just right that you start with this when introducing one cat to the other.

You can do this through the “scent swap” method. Here, you will need to exchange their blankets or any piece of bedding regularly. You can also swap their towels. Basically, any material that has the cat’s scent will work.

Give Both Cats Space To Adjust

No matter how compatible two cats are according to their breeds and personalities, don’t expect them to click right away. Similarly, it won’t be a good idea to force them upon each other. Give your cats space to adjust and cope with a big rehoming change. Doing so will help them react more positively to interacting with other cats.

It’s also important to note that you keep the cats in separate rooms at the start of the introduction process, so as to not shock the two felines.

Provide The Cats With Separate Necessities

Cats can become extremely territorial. This is also true for Siamese cats, no matter how sociable they may seem.

That said, when introducing a new cat to them, make sure that you provide the two with separate feeding and drinking bowls, beds, blankets, and other necessities. This will help avoid early issues with aggression and extreme territorial behaviors.

Give Time For Both Felines To Bond

Apart from space, you should also give your felines time to bond. It’s best to do this once you notice that they look a little comfortable with each other, and there is no tension present when they are together. Give them toys, or assist them to play together outside.

For the best results, start by letting them play for about 10 minutes, and gradually increase the time frame until they can play on their own. You should also keep a close eye on them during the introduction, so you can immediately know if one or both of them feels stressed and overwhelmed.

The last thing to remember when introducing new cats to your Siamese is to take baby steps. As a feline, take note that they are sensitive to change, and thus, they may find it hard to adapt to change immediately. Don’t force nor push your cats to bond immediately, and have patience if ever one of them has difficulty coping.

Do Siamese cats need a companion?

The short answer is yes. Siamese cats strive to always feel seen and noticed. They will easily feel lonely, or worse, depressed if you leave them alone for too long.

Hence, if you’re a student, employee, or just someone who needs to spend most of their hours outside, it’s best to give your Siamese a companion. It can be another cat, a dog, or other animal, as long as they can play together.

Note that you will have to introduce them carefully to avoid issues. Give them time and space to work on it.

Why Does My Cat Smell So Good?