Why Do Siamese Cats Have Crossed Eyes? 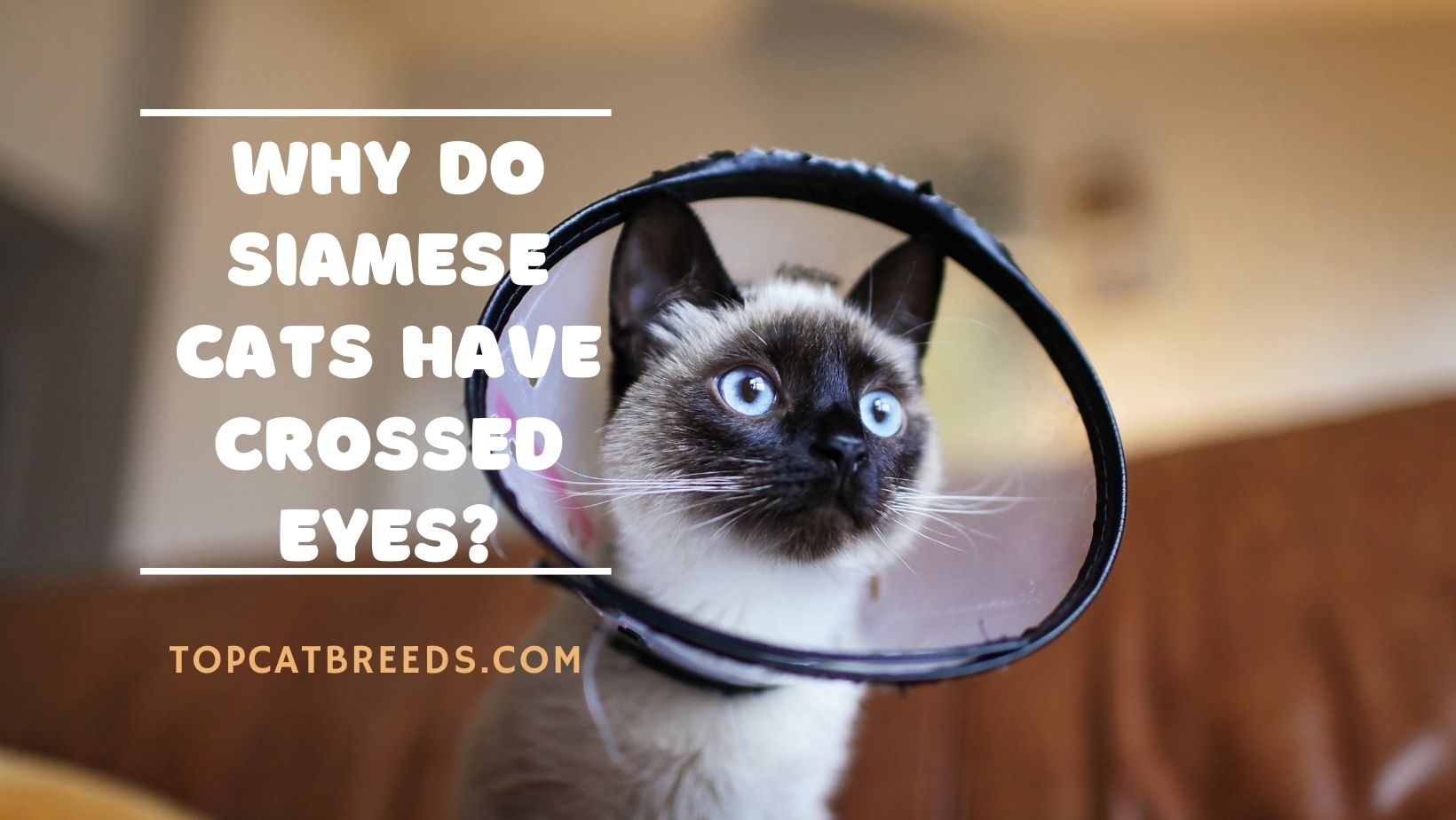 It’s one of the many distinct qualities of a Siamese cat to have crossed eyes. Some are natural since birth, while some cross their eyes on purpose to enhance vision. It’s ironic, but it’s actually one of the main reasons behind the condition.

The problem is it can be hard to understand a cross-eyed Siamese cat. When is it a natural occurrence? When is it considered a medical condition? You need to invest time and effort in observing your Siamese be fully knowledgeable.

Now, why do Siamese cats have crossed eyes? Read on to the following sections to know.

Why Does My Siamese Cat Have Crossed Eyes?

There are a lot of possible reasons why you’re dealing with a cross-eyed Siamese cat. It’s characterized into two versions, depending on what you want to believe in. The first one is rather tale-focused reasoning based on an ancient legend, and the second involves scientific explanations.

To make it easier to understand, here are the three main causes that you should know:

Starting with the less logical yet still entertaining reason for Siamese cat owners is the long-living legend about Siamese cats.

The story states that the said breed of felines had a responsibility to guard a royal goblet. It was golden and required the highest level of security possible. Because of this, the Siamese cats stared at it hard for so long until their eyes eventually shifted, and, thus, the cross-eye.

The myth also said that having the strong urge to protect the goblet was the same reason why most of the tails of Siamese cats are bent, almost curled.

2. Inborn Quality Due to Breeding

Sometimes, there is nothing wrong with your Siamese cat even if they are cross-eyed, or they cross their eyes occasionally. The quality has been around since the start of breeding, so there’s a very high chance that it can simply be natural and inborn to your feline.

You will know that you aren’t dealing with any health issues if your cat doesn’t seem to be in pain, they don’t have disrupted movements, and they can do things like a regular feline. If want to be sure, then it will never be wrong to go to a vet and get them checked up.

3. Your Siamese Has A Medical Condition

In some cases, the crossed eyes of your Siamese cat may be a sign that they have a medical condition or a regular health issue. Whichever it may be, it’s a must that you look into it if they look like they are experiencing any kind of discomfort.

There are two most common reasons how a cross-eyed condition becomes an issue.

The first one is when your Siamese cat’s family has a history of eye condition, and, thus, causing hereditary health problems. When it comes to this, you should look out for either strabismus or nystagmus, since there’s a high chance that you’re dealing with these. These aren’t harmful and will not affect your cat’s vision, but it won’t hurt to know the maintenance tasks that they need.

Due to environmental conditions

The second one involves cases wherein the feline-only gets crossed eyes later on in their life. This usually happens your cat’s eyes are exposed to allergens like smoke and dust. Excessive and direct contact of the eyes with sunlight can also play a big part in damaging vision or modifying eye structure.

Make sure to consult a professional if you notice that your once regular-eyed Siamese cat has shifted retinas, crossed eyes, and any other eye-related issue.

Are All Siamese Cats Cross-Eyed?

Although there are a lot, you can expect that not all Siamese cats have crossed eyes.

A good majority of the Siamese breed in western countries usually have normal eye conditions because most cat breeders are trying to eliminate the quality. They have been trying to breed the “modern” version of the breed, which involves several changes in its body parts. Note that this is not necessarily because some consider it as a flaw, but it’s simply done to promote better eye health to Siamese cats.

Cross-eyed felines are more commonly found in Asian countries, specifically Thailand since this is where the breed originally started.

Read also: Why Are Siamese Cats So Vocal?

Is The Siamese Cat More Prone To Eye Ailments?

It’s a common misconception that Siamese cats with crossed eyes can’t see well. In contrast to this, they can actually see things like a regular cat. This is unless the condition is caused by a health issue.

The issue lies in how prone they are to eye ailments. Siamese cats, no matter if they are cross-eyed or regular-eyed, have a higher chance of catching eye-related issues. This is mainly because of the breed’s rather irregular vision senses. It also doesn’t help that their night vision is not as good.

That said, some of the eye problems that you should look out for are progressive retinal atrophy or PRA, glaucoma, and eyelid mass. All of these can damage or totally eradicate your cat’s vision, so keep a close look at their daily condition. You should also make it a habit to check the state of your cat’s eye regularly, so you can be able to catch up on symptoms in their early stages.

To add, availing of a regular health checkup from a professional veterinarian can also help as prevention.

What Should I Do If My Siamese Have Crossed Eyes?

Now that you know the answer to, “Why do Siamese cats have crossed eyes?”, let’s now talk about what you should do if your feline friend is part of the cross-eyed majority. Keep in mind that dealing with a Siamese with crossed eyes can both be easy and hard, depending on whether a health issue is involved or not.

To better understand, here is a list of what you can do as a reference:

Observing your Siamese cat is the main key to knowing what you’re dealing with.

Determine if they can move normally despite having crossed eyes or they wince in pain once in a while. You should also check if their eyes are crossed on a regular basis, do they switch in between regular and crossed eyes, or if they have a more unusual set of crossed eyes compared to other Siamese cats.

Knowing the answer to all of these will help you have a better grasp of whether your feline friend is normal or not. It will also help you keep track of their eye’s possible changes.

2. Take Your Cat To The Vet

No matter if you feel like your cat’s eyes are normally cross-eyed or they have a possible eye condition, taking one trip to the vet will surely help. They will be able to do more specialized tests, so you will have a definite answer about your Siamese’s health status.

Another thing, a professional will be far better at detecting the early stages of eye problems. Hence, expect that they are more than qualified to give you advice on what to do to keep your cat’s eye health at its best.

Since being cross-eyed is considered a normal, old-school quality in Siamese cats, it’s one of your choices to simply not do anything and let your cat be. Note, though, that this is only applicable if you’re fully sure that your cat isn’t experiencing any pain nor do their eyes look unusual or damaged.

Overall, why do Siamese cats have crossed eyes?

If you want the short answer, then it will lie either in their breed’s nature or a medical condition. It’s usually the former, especially if you bought your Siamese from a breeder. To know if it’s the latter, try to observe if your cross-eyed Siamese cat often encounters

Read also: 7 Best Cat Breeds for Anxiety – How to Pick the Right Feline!

Are Millipedes Poisonous to Cats?