Why Do Siamese Cats Bite So Much? 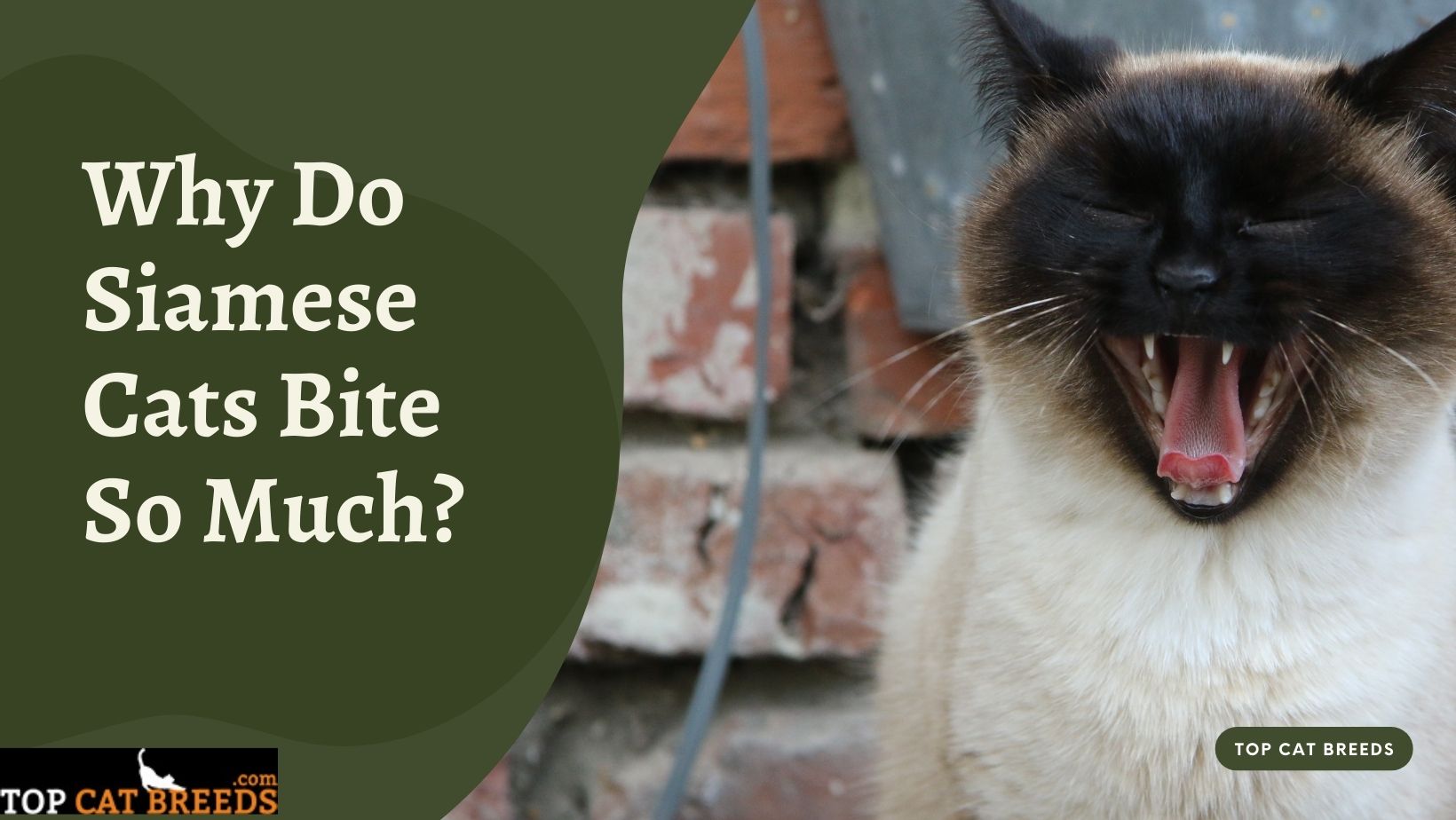 Any cat will bite you for many reasons if the situation asks for it.

However, this is not necessarily the same case for Siamese cats. You see, being cute and cuddly isn’t really their only key quality. They are also known to have distinct characteristics like being extremely communicative. This is the main root behind the problem with Siamese cats’ aggression.

To help you better understand the feline, their behavior, and what you can do as a remedy, then read on to the following sections.

Compared to other breeds, Siamese cats are known to be more aggressive. In fact, the breed is known to be one of the most aggressive out of the whole feline line.

There are many reasons why Siamese cats tend to show off the quality more, but it’s mainly because of the feline’s rather expressive and reactive nature. The breed also has a reputation of being demanding and attention-loving, so there’s a high chance that they’ll show their aggressiveness if they are deprived of their needs.

That said, it’s just right that you’re prepared to deal with aggressiveness once in a while if you plan on owing Siamese cats.

Why Do My Siamese Cats Bite?

Why do Siamese cats bite so much? There are a lot of possible reasons why Siamese cats may bite you. However, it will all revolve around how they are feeling. Thus, you will need to observe factors like where they are, what they are doing, who they are interacting with, and likes. Their body language should also be considered.

For a better overview, below is a list of the most common reasons behind the biting:

1. Your Cat Is Not In The Mood

There are some times when your cat is simply not in the mood to move or interact even with its owners. You’ll easily notice this if they’re quieter than usual without any evident reason. If you constantly bug them while they are in their state, then there’s a high chance that they will resort to biting to make you, or whoever is annoying them, stop.

You can’t really avoid this since it’s in a cat’s nature to isolate themselves at times. You can simply prevent yourself from getting bitten by not invading their personal space or constantly touching them when they don’t want to.

Siamese cats tend to bite a lot when they feel very excited. If you’re holding them when they’re at this state, and they start to bite you, then it means that they want to be let go of. They want to explore or roam around.

On the flip side, they may also tend to bite the people and animals around them if they’re feeling playful and excited at the same time. Try to lightly scold them if this happens to avoid it from being a regular behavior.

3. The Feline Doesn’t Feel Like Being Touched At The Moment

Most Siamese cats like being petted and groomed. However, there are still times when they don’t want to receive physical affection for a specific amount of time. This may happen if they’re not in the mood or they don’t feel very well. This may also be the case if they’re currently in heat.

That said, if you continuously engage in physical affection despite your cat showing negative reactions toward it, then expect them to bite you as a last resort.

4. They Are Either Scared Or Mad

A cat may bite you if they’re either scared or mad at you. This can be the most common reason, especially if we’re talking about a Siamese cat that isn’t your own or just doesn’t have a close bond with you.

If this is the case, then there’s a high chance that they are defending themselves from you. You can immediately know this if they hiss or try to scratch you along with the bite.

5. They Are Seeking For Attention

Generally, Siamese cats love the attention. Unless they occasionally feel otherwise, expect to want to be constantly around you. If they don’t feel seen or recognized, then that’s when they resort to biting. They bite the person or animal on purpose to finally get their attention once and for all.

How Can You Stop Siamese Cats From Biting?

No matter how much you love your Siamese cat, you don’t necessarily have to put up with their constant biting. This is most especially if their bites really hurt or if they aren’t vaccinated yet. You have two main choices. The first one is to hire a professional animal trainer, and the second involves very simple tasks. This section will focus on the latter choice. See the following list:

1. Leave Your Cat Alone For A While

It can be a big behavior issue if your Siamese cat becomes too used to biting people and animals even without apparent reason. To prevent it from going this way, a good disciplinary measure that you can take is to leave your cat alone for a while. Try ignoring them when they bite you to show dominance.

Similarly, leaving them alone can also help if you feel like they’re not in the mood to engage in any kind of interaction. It will let them recover and recharge on their own, and at the same time, avoid the painful bites.

If the cat bites you because they’re scared, then you can try reaching out to them again as a way of earning their trust. Just make sure to do it carefully, so they won’t feel threatened or overly defensive. Keep in mind that this approach will take time, especially if the feline finds it hard to open up to people.

3. Give Your Feline Toys

Giving your Siamese cat toys is a good choice to stop them from constantly biting around. It will serve as their distraction, and there’s also a high chance that your cat will turn to it when they want to bite something. It can also aid in better teeth growth if they’re still young.

Read also: Toys For Cats That Like To Chew

Are Siamese Cats Meaner Than Other Cats?

Siamese cats can definitely be meaner than other cats. However, this only usually happens when they’re put in a stressful or pressuring situation. They can be aggressive, but not necessarily mean unless you push them to their limits.

Some people may mistake the scratching and claw-showing of Siamese cats as mean, but this is usually just their way of showing affection and playfulness. It’s most especially displayed when they’re hyper or they’re having the “zoomies.”

Easily said, although Siamese cats can be meaner because of their breed’s nature, it won’t always be the case. They can actually be very loving, especially if they’re treated right.

Read also: Why Are Siamese Cats So Vocal?

If you’re still asking why do Siamese cats bite so much, there is no short answer.

You need to properly and thoroughly observe your cat and the circumstances surrounding them. Deduce the kind of environment they are in, starting from the people and animals they’re with up to things like the climate and temperature. The emotions that they are currently feeling will also play a vital part in their reactions, and, thus, the constant biting.

Note that biting doesn’t automatically equate to Siamese cats being mean. It’s a natural feline reaction that can be fixed through constant training and discipline.

Read this too: What Does It Mean When a Cat Bites You Gently?

Ragdoll vs. Siamese Cats – Understand Between These 2 Breeds

Why Do Cats Put Food In Their Water Bowl?