Why Do Cats Yawn So Much? 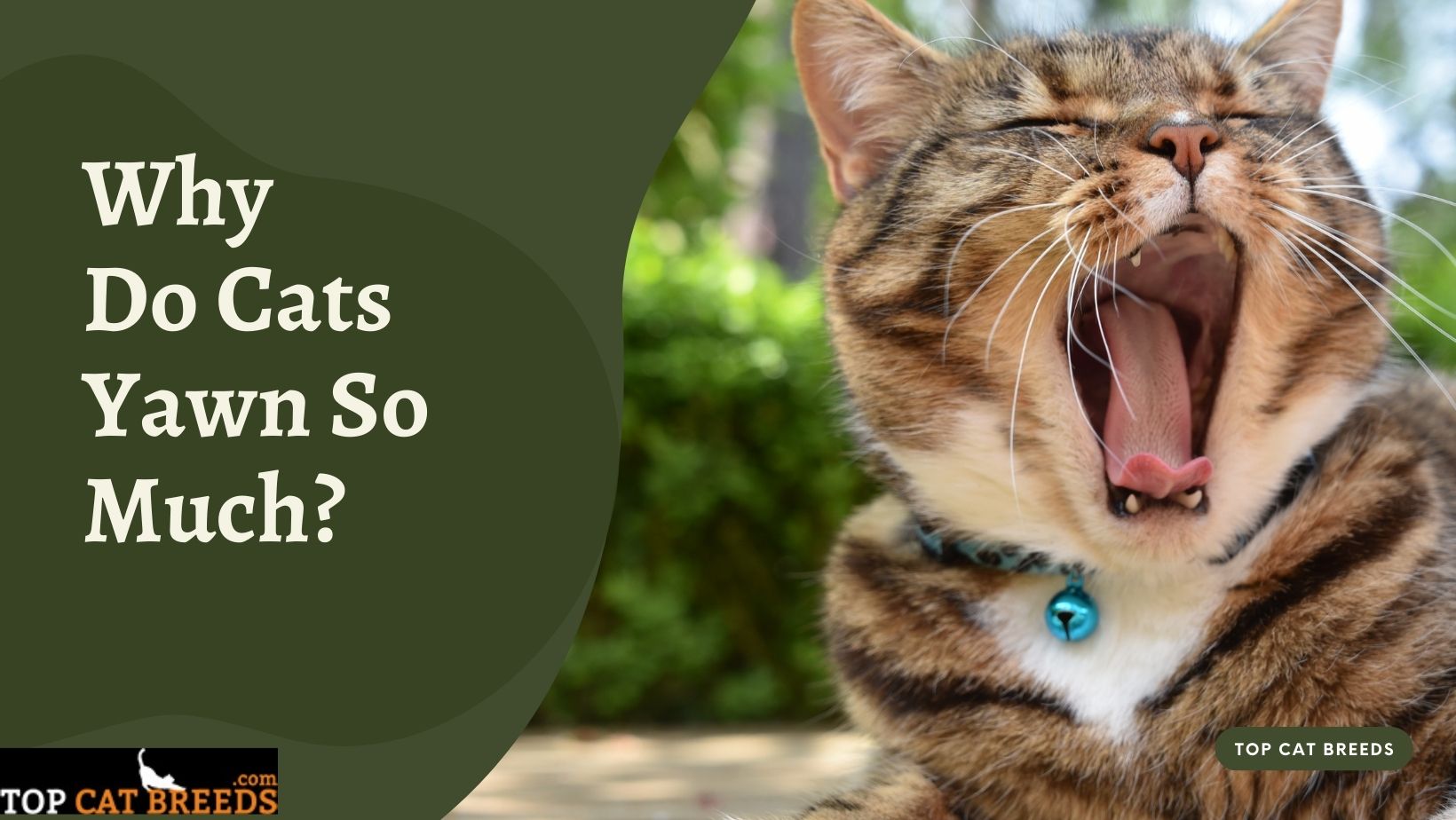 When it comes to us humans, yawning is usually a sign that we’re sleepy. It can be uncommon to yawn so much, except if we’re exhausted.

However, if we talk about cats yawning, things can be a little different. As a cat owner, you don’t really need a keen eye to notice the countless times cats yawn, even in just a single day. Not only that, but the reasons will also vary since when cats yawn, it rarely means that they’re just sleepy.

So, why do cats yawn so much? What does it mean when a cat yawns? This is what we’re going to walk you through in this article.

How Many Times Does A Cat Yawn?

On an estimated average, a cat can yawn around 109,500 times throughout its lifetime. Just like how it is for humans and other animals, it can start from the first week from they are born. It will be a continuous habit or behavior as long as they are alive.

Now, it’s impossible for a cat not to yawn at all. Some cases cannot be as frequent as others, but it can’t be “totally never.” This is because felines usually yawn to bring oxygen into their brain and blood. It is also believed that they use this for communication and overall expression.

What Does It Mean When A Cat Yawns?

There are quite a number of possible meanings behind a cat’s yawn. You have to assess their current condition and the body language they’re projecting to know exactly what they want to tell you.

For reference, here are some of the reasons why cats yawn:

Yawning has a direct relationship with feeling relaxed and sleepy. This is true even if we’re talking about felines. This being stated, you can expect cats to yawn if they feel assured in the environment that they’re in.

Felines may do a relaxed yawn during the sleepy hours of the day, like a plain afternoon or before sleeping in the evening. It will serve as a preparation for their body to finally doze off and shut down alertness.

2. Your Cat Feels Comfortable Around You

Similar to the former, a cat may also yawn as a way of showing that they are comfortable around you. This most usually happens if they are around their most trusted owners.

Yawning becomes a positive body language if this is the case. Cats that aren’t usually showy through physical affection may resort to this for greetings and as a way of settling in. They may also make the habit whenever you pet them. It is often followed by a soft purr.

3. It Is Your Cat’s Way Of Stretching

It is common for a feline to yawn first thing when they wake up. This is a more common occurrence in the morning.

Here, yawning becomes their way of stretching to fully get ready for the day. A big body stretch may accompany this to top the routine off. This type of yawning may happen either in the morning when they first wake up after a full sleep or when something disrupts them from their nap.

Read also: How Much Sleep Do Kittens Need?

On some occasions, a cat may yawn too much when they feel stressed about something. It becomes their coping mechanism as a way of releasing extreme stress and conflict levels. This can happen if they are forced to stay in a different place than they’re used to or get caught up in a fight with other animals. Having constantly disrupted sleep can also contribute to this situation.

Worst-case scenarios can involve cats enduring discomfort brought by internal or external pain. Observe them for lethargy and other unusual behavior to ensure that this isn’t the problem.

5. The Cat Is Trying To Stay Alert

If a feline sense any kind of danger, they may yawn as a way to stay up and alert for possible attacks.

The scientific reason behind this is that the oxygen supply brought by the yawn to their brain helps them get rid of any existing feelings of tiredness. It also regulates blood flow, which makes them even more awake.

What Should I Do If My Cat Yawns Too Much?

Now that you know the answer to “Why do cats yawn so much?”, let’s move on to what you should do during these instances.

Realistically, you don’t have to do anything when your cat yawns too frequently. If they don’t look disturbed or uncomfortable, then you can let them be since they may only be feeling comfortable or sleepy.

However, if the feline is, for example, in a new environment, then you can comfort them by petting their backs or rubbing their bellies. Some cats may also prefer being left alone, so try to deduce the right approach to them based on their personality. Clingier cats, for instance, may prefer the former.

Some serious cases reported that an alarming frequency of yawns in cats is tied to disorders relating to their oral cavity. Try to see if they’re in any kind of physical pain and discomfort or get them checked up by a professional vet.

When a cat fakes how they yawn, they usually just stretch their jaws as wide as they can. Unlike normal yawning, they don’t feel the need to stay alert, sleep, or even take in more oxygen. They’re simply performing a rather large movement.

That said, the most common reason why cats fake yawn is because they want to catch the attention of the people around them. This is also why some felines yawn every time they see their owner.

They may do this if they need something like food, a toy, or just a simple playtime session. You will know that this is the case if they make verbal expressions like meowing or hissing after the fake yawn.

Why do Cats Yawn When They See You?

You may want to take it as a compliment if a cat yawns when they see you. This is because it can mean a lot of positive things for your feline friend.

For one, it may be a sign that they feel comfortable around you, and they yawn as their way of showing how relaxed they are. Another thing is they may have acquainted your presence with ease or any other rewarding behavior, resulting in a yawn.

In most cases, cats yawning may also mean communication. This may be their way of calling out to you and, at the same time, seek for attention and time.

Why Does My Cat Yawn When I am Yawning?

If a cat yawns when they see you yawn, it means that they have a high level of empathy for you. They may have a close bond with you, so they tend to yawn when you do. It may also be a natural behavior where they mimic your movements either out of defense or affection.

Are Yawns Contagious For Cats?

Yawns can both be contagious and non-contagious for cats. It will depend on factors like the cat type and their environment.

A study showed that domestic cats are more prone to contagious yawns, which may be the case if your cats yawn after you or other animals. On the flip side, the researcher also noted that if a cat doesn’t have a close relationship with its owner, then it’s unlikely for them to catch human yawns.

Although there are mixed findings regarding whether cats can really catch yawns from people, there’s still sufficient evidence to prove the pro side. Refer to this news from Japan, for instance. It showed a case where a cat picked up the yawn of another cat and its owner.

Overall, it will come down to whether a cat has enough sympathy to feel the contagiousness of a yawn and their relationship with the animal or human that yawned.

Why do cats yawn so much?

There are several answers to the said question. It will depend on factors like the current environment and state that your cat is in.

For instance, if your cat is in a somewhat new environment, it may yawn several times in order to stay alert. There are some times when they’re stressed, and yawning is their way of coping.

On a simpler note, cats may simply yawn too much because they picked it up from other people or animals.

Whichever reason, yawning is nothing to worry about. It’s a normal coping mechanism for felines.

How Much Attention Do Cats Need?

Why Do Cats Knead and Bite Blankets?