Why Do Cats Walk in Front of You? 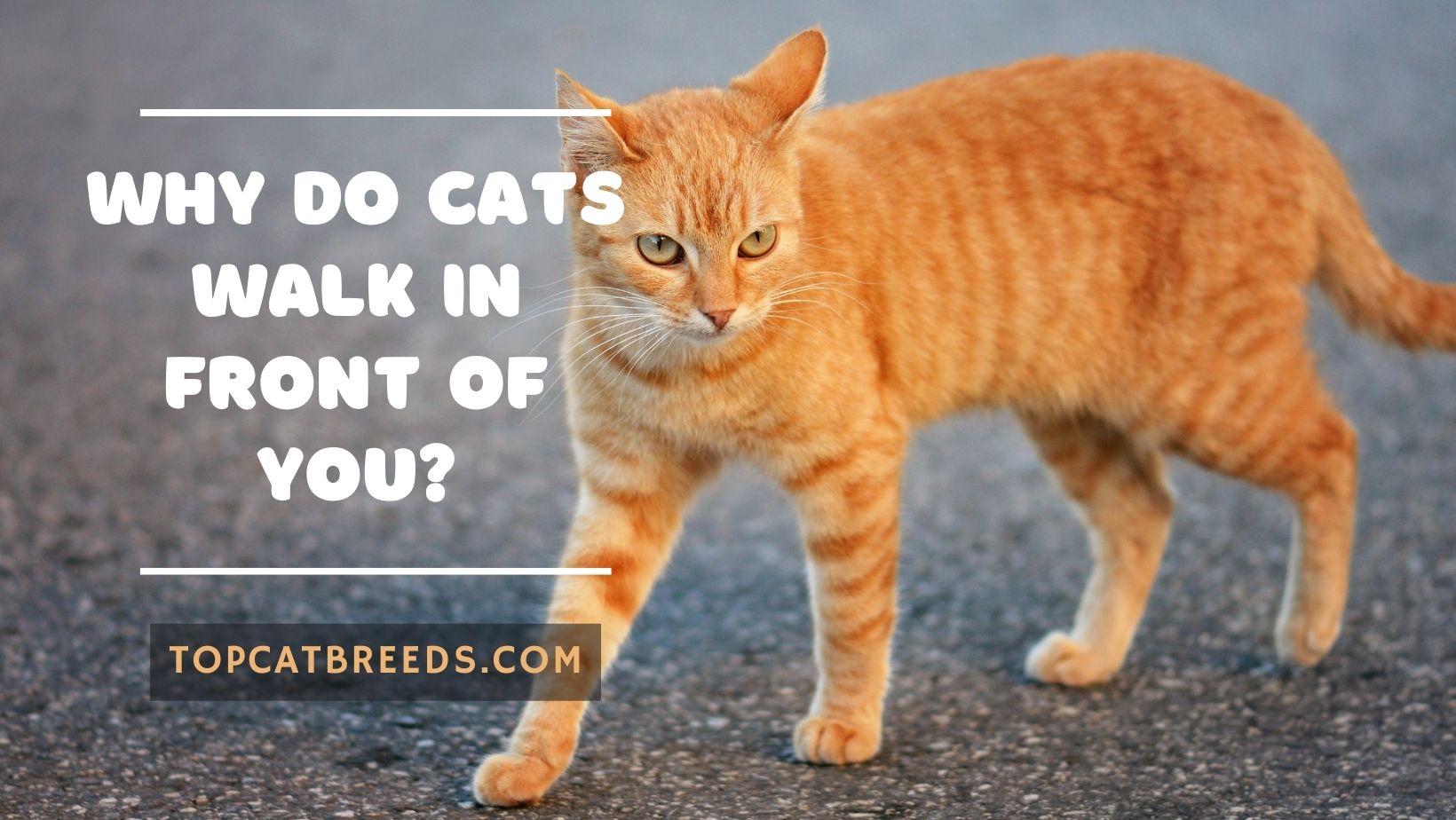 Why do cats walk in front of you? Sometimes, it’s hard to walk through your home without seeing your cat in front of you. It can be fun, and it can be annoying, but it can also end badly.

In most cases, cats will walk in front of you to try and herd you. This behavior is a sign of dominance. Contrary to popular belief, your cat is not trying to trip you. Felines are merely following a specific direction for some reason. There are also other possible explanations for this behavior.

Why Do Cats Walk in Front of You?

You will learn about various reasons that motivate cats to walk in front of people. Aside from being a bit dangerous, this behavior can also be very frustrating and harmful.

To Lead You Somewhere

In terms of animal behavior, herding cats is a difficult task that can be very hard to complete. However, cats are natural herders.

When hungry, your cat will walk in front of you and direct you to its food bowl. It will also follow you if you are carrying food with you.

If the door to their litter box has been closed, a cat can easily lead someone to address this issue. Sometimes, a cat will try to herd you to prove that it can get you to its desired location. This behavior is not considered aggressive or threatening.

There’s a lot of evidence supporting the idea that cats are not as independent as they used to be. They are also quite happy with the humans around them.

Although cats can be independent, they can also be happy with other creatures playing with them in their favorite spot. It comes down to their personality and upbringing.

One of these is greeting you at the door. When we come home, your cat will greet you with a smile and maybe even a meow.

For cats, head bumping is a behavior that involves rubbing its head against the legs of people. It’s a way for them to express affection.

In cats, you can locate their scent glands in their cheeks and chins. By rubbing against their legs, they mark their territory and affirm that it belongs to them.

Read also: Why Is My Cat So Affectionate At Night?

To Ask For Something

In some cases, cats walk in front of their owners due to manipulation. It is not malicious but a way of letting them know what they want.

Your cat’s weaving in and out of your legs is a typical response to stop and direct your attention. Sometimes, it is frustration or a frantic attempt to get back into balance. It will teach your cats that upon seeing you, they should approach you.

Sometimes, cats are full of beans. They will occasionally run across your path due to their excess energy. They might also want to contact you and ask you to join their game.

How Do You Get a Cat to Stop Walking in Front of You?

Watching your cat follow you where you’re constantly walking can get old quickly. There are a few things that can help minimize this behavior.

To avoid getting spotted by your cat, avoid walking in front of them. Try to ignore your furry friends when they try to trip you. It will help keep your felines from darting in and out of the way.

Teach Them to Be Independent

It’s also a good idea to teach your cat to be independent. Most cats are good at hanging out independently, but some are needy. This action will help them avoid being too affectionate, tripping you, and getting you both hurt.

Get a few interactive cat toys to prevent your cat from getting distracted. Your cat may also benefit from playing with toys that encourage them to play independently.

For instance, automatic feather toys are an excellent alternative to traditional toys that require constant attention.

If your cat often trips you because it needs to refill its food bowl, the automatic cat food bowls might be helpful.

What Does It Mean When a Cat Walks Between Your Legs?

When it comes to determining what your cat is up to, the best way is to stand back and watch. It will help you better understand what they are doing.

Sometimes, a cat is trying to express dominance. The lack of other cats usually triggers this behavior to help it communicate its authority. It could also lead to more aggressive behavior, such as marking its territory with urine. Cats will also do this because they want attention. It could be that they’re bored or trying to be close to you because of their separation anxiety.

Another possible cause is that a cat might be experiencing disorientation after suffering an injury, such as a car accident. Usually, cats hide their injuries by lying low. However, if their behavior becomes more bizarre, they might need a veterinary visit.

Take a step back and watch as the cat approaches. It could be that you’re trying to take yourself somewhere or that your cats are worried about something. Your furry friend might also be trying to herd you towards its food bowl.

For instance, if your cat’s food bowl is empty, it might need a freshening up. It could also lead your cat toward the litter box or the back door.

How to Prevent Yourself From Tripping Over Your Cat?

Even if your cat is excited about seeing you, it can be frustrating to see them react the same way every time you return. It can also be dangerous to carry large items in your bag when this happens.

Your child mustn’t get tripped up while still learning to walk with their feet. Also, make sure that the elderly or injured persons living in their homes are away from the mischievous cats.

There are various reasons why a cat may behave in a certain way. For most people, this can be challenging, but some steps can help you break this behavior.

Take the time to focus on your cat when you get home. Put down anything that can distract or irritate your cats and give them a sweet and affectionate greeting.

If your cat has difficulty following your greeting, try giving them a toy in the doorway. The toys will help distract them and allow your cats to walk safely.

Before they walk in front of you, give them the attention they need. It prevents your felines from thinking that their behavior is not to your liking.

When your cat mainly walks in front of you during food time, try carrying them to the food bowl. However, some cats don’t like this. They prefer to walk by themselves.

If your cat constantly gets underfoot while preparing food, try closing them out or placing a cat post inside the kitchen to prevent them from getting in the way. Another trick is to put a bell on your cat’s collar gently. It will let you know if they are coming closer.

Why Do Cats Run Ahead of You?

Your cat may run ahead of you for various reasons, but most likely, it’s because of hunting, dominance, or herding. Your cat probably is herding you toward it if it’s eager to show you something. Or, it might be hearing a strange sound outside.

Although cats are natural hunters, they also habit-chasing people. If it’s an indoor cat, it’s not ideal to be in this position, as it doesn’t have many other things to hunt. Try giving your feline something to chase, such as a laser or fishing pole.

This behavior is also charming, as it shows that your cat is trying to dominate someone. However, it can also lead to less-than-ideal behavior.

In most cases, cats will walk in front of their human companions to show affection. This behavior is a polite and non-threatening way to communicate with their owner.

Sometimes, it’s funny to see your cat acting strangely. However, after a certain point, this behavior can become very dangerous. You can minimize it by giving it proper affection and a slight change in your routine.

How You Can Keep Fleas Out Of The Litter Box?