Why Do Cats Shake Their Paws? 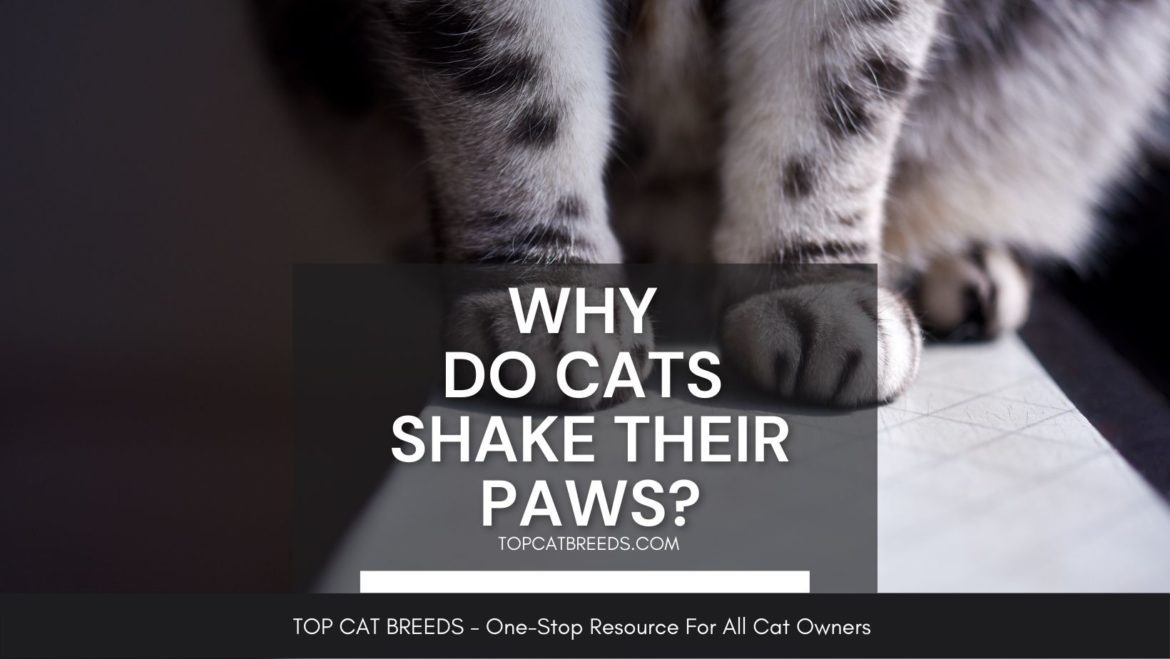 Why do cats shake their paws? Your cat has sensitive feet. They have a variety of nerves that run from their toes to their pads. Even touching their paws can trigger these nerves.

Cats often shake their paws for various reasons. Some of these include relieving pain, cleaning their feet, and relieving their allergies or other petty issues. These minor problems do not mandate much attention.

Although it may look like a harmless twitching, your cat can shake its paw for several reasons. By carefully watching its behavior, you can determine the cause of its unusual behavior.

What Does It Mean When a Cat Shakes Its Paw?

A cat’s paw shake is a reflex action triggered by various factors. There is an assortment of bases why this behavior occurs.

When a cat walks into the water, it will shake its paw to help dry its fur and prevent water droplets from settling on its surrounding coat.

A cat’s paw shake is similar to shaking our hands dry when we don’t have a towel. It’s hard to see what’s happening.

Read also: Can You Dry a Cat With a Hair Dryer?

As a cat runs around, it will often find various objects, dust, and dirt on its paws. It will vigorously shake its paw to remove these objects.

One of our cats came home one afternoon and started chewing and shaking his paws. He had trodden on tar, which prevented him from spreading his toes.

An out-of-hours veterinarian suggested that we apply butter to the tar to soften it. This method took a couple of hours, but they eventually removed it.

Cats may be shaking their paws to relieve the pain they’re feeling in their feet, which various reasons can cause.

Some of these include a cut, a bad landing, an insect sting, and ingrown nails. Aside from rubbing their paws, cats can also lick them to relieve their pain.

Having your cat declawed may cause her immense pain and discomfort, and it could also lead to her having to shake her paws. However, while it may be beneficial to have your cat declawed, it may also cause her to lose her ability to scent mark and climb.

Although declawing is considered a standard treatment for cats, it can be excruciating and lead to a lifetime of confusion and pain. You should consider these factors for medical reasons.

If your cat continuously leaves its litter box shaking, it can signify that the litter is causing the problem.

Certain materials and brands are worse at tracking than others. To address this issue, change to a new variety that doesn’t track.

Some cats may experience involuntary muscle twitching and shiver-like movements known as fasciculation, which can also shake their paws. A genetic disorder usually causes this condition.

Some of the conditions that can affect cats include epilepsy, kidney failure, rabies, and hyperesthesia. Bring it to the veterinarian immediately if you notice that your cat is constantly shaking its paws.

Cats often shake their paws while drinking water, reminding them of their mother’s milk. It is usually the case when a cat separates from its mother at a young age.

According to experts, cats have flexible scent glands that they can use to detect and respond to scent. They also use these glands to regulate their body temperature and act as shock absorbers.

If your cat is shaking her paw even though it’s clean and dry, it’s because she’s expressing her feelings of disapproval or disgust.

Some owners have called this behavior the paw shake of disdain. It usually happens when the animal doesn’t like its food or when it’s loud and the noises are annoying.

Cats can also shake their paws when people prevent them from doing something they disagree with. IT could be chewing electrical cords or treating their fleas.

Why Do Cats Shake Their Paws After Eating?

Your cat is doing this to clean up its paws after eating. It’s not unusual for them to use their paws when eating. For instance, they might fish out a few pieces of food to eat separately.

Cats are sensitive to their bodies and are known to shake their paws to remove particles that they may have acquired in their claws or between their toes. Sometimes, they also feel a bit of saliva on their bodies after eating.

Why Do Cats Shake Their Paws After Declawing?

Since it’s major surgery, your cat may feel soreness for a few days after the operation. It can also be triggered by paw shaking. It is your cat’s way of trying to relieve the pain.

If your cat is still shaking its paws two weeks after surgery, it’s essential to contact your veterinarian immediately.

Before you decide to declaw your cat, make sure that you understand the procedure’s various benefits and risks. It’s essential to be informed about the process to make the best decision for your pet.

Why Do Cats Shake Their Paws When Walking?

Although cats are known for their agility, they can also get injured when they make a mistake. Even though they can easily walk hastily on their feet, they can still injure themselves.

Also, if your cat likes to jump off cliffs or over uneven surfaces, then an injury might occur. They might also fall from a certain height and hurt themselves, trying to shake their feet to relieve the pain.

Why Do Cats Shake Their Paws Before Going Out?

Your cat may sometimes feel like it has something on its paw before going outside. It could be an attempt to remove something from its foot, such as cat litter.

Why Do Cats Shake Their Paws in Sleep?

Getting the appropriate dose of sleep is very important for cats. When they sleep, they can feel their entire body moving. It’s believed that their dreams last for a whole day.

Your cat will shake and dream about its favorite activities in most cases. It is the most common time they will do this, as their eyes rush during the REM cycle.

Read also: Why do Cats Knead with Their Front Paws? Here are 6 Reasons

Why do cats shake their paws? Most of the time, shaking your cat’s front or back paws is not a cause for concern. They are probably just wet, and it’s going to be okay.

If your cat is constantly shaking its paws, it’s essential to examine it thoroughly, as it could indicate an injury or something that needs to be taken care of. If it doesn’t stop, take it to the veterinarian for a check-up.

How Come My Cat Not Eating After Dental Cleaning?

Why Are My Cats Claws Brown?