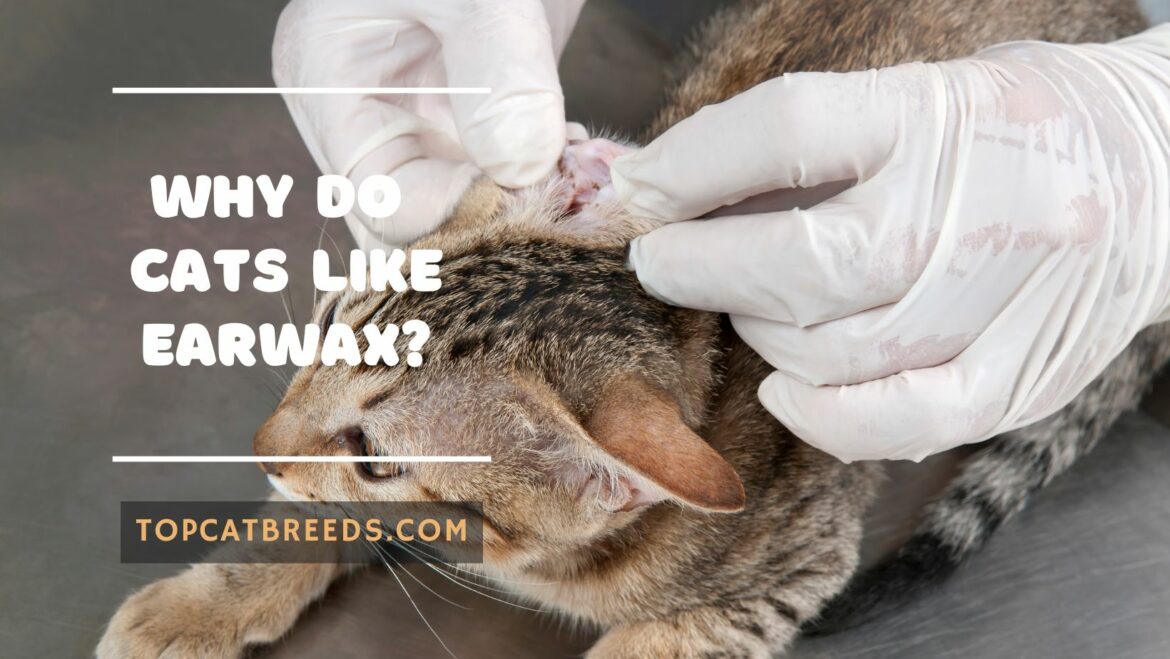 Why do cats like earwax? If you’re fortunate enough to own a cat as your companion, you probably share many things with your pet. Some of these include your bed, your lap, and your food. But what if the cat wants to share your earwax?

Your cat is not alone if he likes earwax. He may be a literal cat burglar who’s after your earlobes or cotton swabs.

The protective oil produced by the glands in the ear canal is known as cerumen. Although it doesn’t sound like a lot of competition in cat food, a 1991 study revealed that the organic composition of earwax could help explain how it’s attracting your pet’s attention. According to the researchers, the oil contains various nutrients, such as cholesterol and dead skin cells.

Although these ingredients may not look what you’d want to serve your cat, they smell like part of their diet. Cats are carnivores, meaning they consume a lot of meat to get the required nutrients. Thus, the proteins found in their earwax can trigger their response to the bits of debris in your bin.

According to the simplest explanation, earwax is attractive for cats as it doesn’t have an unpleasant odor. It comes from dead skin cells and fatty acids and is a source of protein for felines. Since cats like protein, this combination of nutrients can help them survive and develop.

Cats only have around 500 taste buds, while humans have upwards of 5,000. For instance, cats don’t like to eat sweets. Instead, they prefer to eat fat. This means that if you own a cat that likes cake icing, it’s most likely that she’s attracted to the fat instead of the sugar.

Due to their lack of taste, cats have developed a sense of smell to guide their food. Cats may better discriminate between different smells than dogs. Some may believe that this proves that cats are more selective regarding food, though it shows that they use their noses for taste.

Particular food and products that contain the smell of protein and fats can be good for cats. It includes food cans, earwax-coated headphones, and cat food.

You may have noticed that cats spend a lot of time grooming each other’s ears. It is because of the yummy earwax, and it creates stronger bonds between the pet and its owner.

If your cat is trying to clean your ears, she might not be sending you a signal that they’re dirty, just that there’s some good stuff in them. However, it’s generally not a good idea for you to let your cat do this. Cat saliva can contain bacteria you wouldn’t want to come into contact with, and some cats have very foul breath.

Contrary to popular belief, cat saliva contains a protein that causes over two-thirds of feline allergic reactions. If you or someone you know has cat allergies, you must give your pet a gentle nudge to avoid chewing on their ears.

How To Prevent Cats From Eating Earwax?

Although earwax is not harmful to your cat, it’s still a concern if he won’t stay out of the trash. According to Johnson-Bennett, getting into the trash can be dangerous for cats. In addition to toothbrushes, razor blades, dental floss, and other objects that can harm felines, there’s also a chance that some or all of these tools will end up in your cat’s stomach.

If your cat is planning on raiding the trash to retrieve soiled ear swabs, make sure that the bin has a locked cover, according to Johnson-Bennett. She also recommends installing a childproof latch.

When your cat is becoming irritable and prone to allogrooming, there are some things you can do to support him. According to Johnson-Bennett, owners can distract their felines by engaging them in more constructive activities, such as food-dispensing toys. Puzzle feeders are also appropriate for those who want to entertain their pets.

This redirection can help maintain the bond between you and your cat. Another fun way to do this is by using the Lickimat, a plastic mat they can use to catch your cat’s tongue.

Why Do Felines Lick Human Ears?

Cats learn how to groom themselves from their moms. They start doing this when they are a few weeks old. They will likely lick and groom each other if they are in a litter. This process aims to remove dead skin cells, keep their skin lubricated, and disguise their scent from predators.

Some people believe rubbing or cuddling on one’s body is a sign of love, similar to earwax. It could be that your cat is genuinely interested in you, or it could be that they’re demonstrating their affection to claim you as their own.

One of the main reasons why cats lick human ears is the scent of earwax. It does not mean that your pet has a thick layer of earwax on their body, as their sense of smell is so potent that even a tiny amount of it can trigger their interest. In addition to being a sign of love, grooming shows a cat’s affection for you.

Read also: Why Cats Flop Down In Front of You?

Cats love Q-Tips because they’re fun to play with and are light, chewable, and safe for consumption. However, they can be hazardous if swallowed. One of the reasons why cats often eat a Q-Tip is because it’s small enough to fit in their mouths. If they have to break it down first, they’ll have a hard time chewing it.

Because of how chewy Q-Tips are, they may tempt your cat to consume or chew them. Some varieties are as hard as plastic or bone, so your cat may enjoy chewing on them. Your cat will most likely break down the Q-Tip if it plays with it for too long.

Why do cats like earwax? Your idea of giving your cat earwax as a treatment might not be ideal, but it is still important to avoid assuming their actions are unnatural or harmful. If your cat is one of those who enjoys getting earwax, then they are okay with it. It is natural and safe for them to do so, and they don’t need to worry about getting sick.

How to Get Your Cat to Eat After Tooth Extraction?