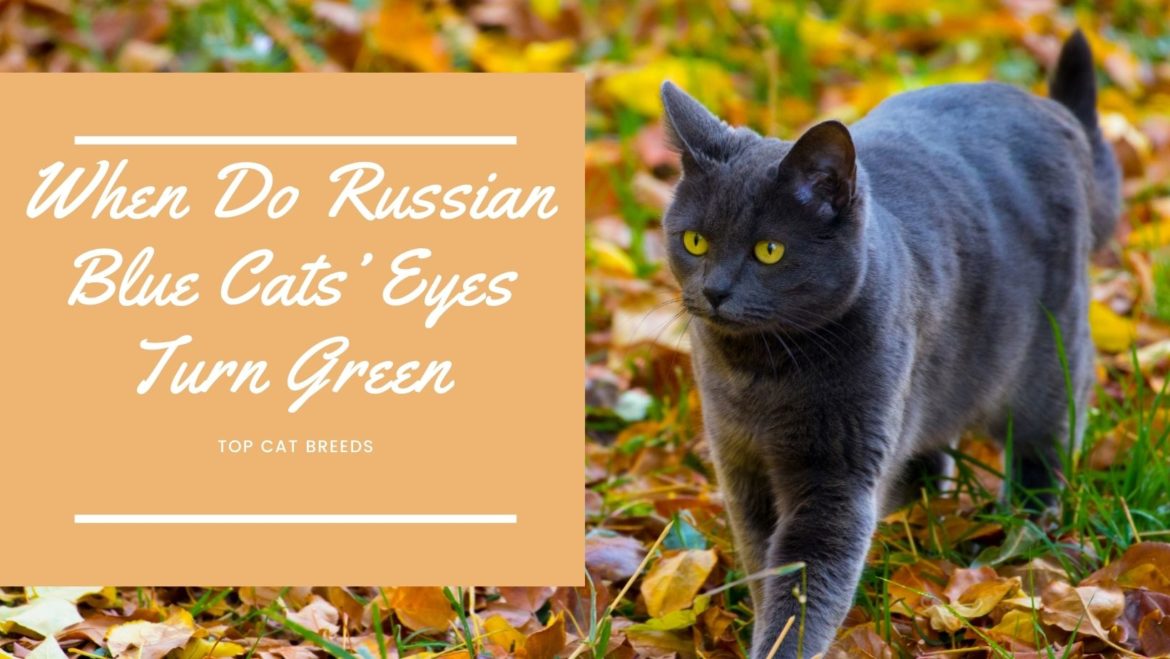 Russian Blue cats are one of the sweetest and most affectionate cat breeds around. Because of this, there’s no question as to why many pet lovers want to have them as their buddies.

Apart from the naturally gentle temperament of Russian Blues, however, there’s one more thing that they are famous for — their eyes. Although it’s a given that cats have beautiful eyes in general, the breed at hand levels it up as their eyes slowly change into bright green orbs.

Now, the question is, when do Russian Blue cats’ eyes turn green? Let’s find out in the following sections.

Do The Eyes Of Russian Blue Cats Turn Green?

The eyes of Russian Blue cats turn green once they reach the adulthood phase of their feline life. This is mostly the case for all Russian Blues, although, of course, there are still some exceptions.

That said, when do Russian Blue cats’ eyes turn green? Let’s look at its timeline below.

First, if you’re wondering if Russian Blues automatically have green eyes as soon as they are born, the answer is no.

The Russian Blue kitten starts with either yellow or blue eyes. A blue-eyed Russian Blue will usually turn from having blue eyes to golden yellow ones before getting green eyes.

Still, note that the initial eye color can still range from similar shades like light silver, bluish-gray, and even very light yellow.

Once the kitten reaches about four months old, its eyes will start to have a hint of green. This may be as little as a single speck or as significant as a green ring around the current eye color. Either way, you can expect the change in color to be more noticeable as the kitten grows older.

By ten months old, the Russian Blue cat should already have nearly, if not full, green orbs.

Do All Russian Blue Cats Have Green Eyes?

Even if Russian Blue cats are mainly famous for having beautiful and bright green eyes, not all of them have green eyes.

Some cats stay with having yellow eyes, and some stop with having blue-like shades. Other Russian Blues, on the flip side, have bi-colored eyes, that is, the combination of green and blue, green and yellow, and likes.

Note that it doesn’t necessarily mean that there’s something wrong with a Russian Blue if it doesn’t have green eyes. Yes, it can be an indicator of a health issue. However, this can also just be because of factors such as genetics, natural environment, and likes.

What Is The Color Of Russian Blue Cats’ Eyes When They Are Born?

A Russian Blue cat may be born with either blue or yellow eyes. Some also have gray or slate-like eye colors. However, blue is the most common eye color of the said breed. This is most especially for purebred cats.

Half-bred Russian Blues, on the other hand, may have cinnamon eyes or any shade of brown. It will still depend on genetics, though. It’s still possible for a halfbreed to have blue eyes at birth and eventually green once it reaches adulthood.

How Do You Tell If A Kitten’s Eyes Will Stay Blue?

There’s actually no definite and end-all-be-all answer as to how you can tell if the eyes of your Russian Blue kitten will stay blue. However, there are some significant indicators that you can use as a reference. See the following sections:

1. If The Parents’ Eyes Are Blue

If your Russian Blue’s parents have blue eyes even if they’re fully grown, then there’s a very high chance that your kitten’s eyes will also stay blue. Of course, the chance still stands even if only one of its parents maintained blue eyes.

Keep in mind that there are still some cases wherein green-eyed Russian Blue parents still end up with a permanently blue-eyed offspring. This may be traced back to the grandparents or the overall hereditary line.

The genetics and breed line will play a huge role here, so make sure to give your kitten’s family a thorough look when figuring out its possible appearance once it reaches adulthood.

2. If The Cat’s Eyes Doesn’t Show Signs Of Changing After 4 Months

Some Russian Blue kittens will start transitioning from having blue/yellow eyes to green as early as eight weeks old.

However, more often than not, the process will start when they are around four months old. Some are late bloomers, so they may only begin having hints of green in their eyes at about six months or so, but this is very uncommon.

That said, if you don’t see any changes past the four to six-month duration, it’s likely that your cat will have blue eyes throughout its lifetime. Still, you will never know for sure until it becomes an adult, that is, about ten months old.

3. If The Kitten Is Born With An Eye-Related Issue

Russian Blue kittens born with eye-related issues or health concerns, in general, may have blue eyes throughout their life. This can range in a lot of instances, but one of the most prominent diseases that may cause this is albinism, which will also affect the cat’s fur color and overall condition of the skin.

Keep in mind that hereditary conditions are not the only ones that can affect the eyes of a Russian Blue cat. When a cat sustains eye injuries and infections, there is also a risk that may cause your cat not to change their eye color, along with other more serious after-effects like being blind.

4. If Your Cat Has Issues With Melanin Production

Just like in humans, melanin plays a big part in a cat’s eye color. Blue eyes happen when the body produces very low levels of melanin. Although this is the same for green eyes, the latter still somehow uses more melanin than the former.

Melanin issues can happen when a cat has tumors, hyperpigmentation, or suffers from diet-related issues.

Russian Blue cats can have yellow eyes as a kitten. This is actually a common case. However, when we’re talking about adults, then this scenario is very unlikely. The only times that this can happen to adult Russian Blues is if the cat has a health issue or it’s not purebred.

Even so, you should expect that under normal circumstances, Russian Blue cats will only have yellow eyes when they’re newborns or kittens. As they grow older, their eyes will get darker and slowly transition to blue or green shades.

Will The Eye Color Of Russian Blues Change With Age?

Considering that a Russian Blue is healthy and isn’t suffering from any kind of issues, age becomes the main factor that affects the change in their eye colors. They will have a different eye color when they are newly born compared to when they finally become adults.

As for Russian Blues, their eyes tend to be brighter and brighter as they age. This applies no matter if it’s pure green, yellow, or a combination.

What Does It Mean When The Eye Color Of Your Russian Blue Changes?

It’s a given that Russian Blue cats change eye color at some point in their lives. However, what does it really mean when this happens?

There are just two reasons why your Russian Blue cat may be changing its eye color. Below are all the things that you need to know:

1. The Cat Is Starting To Age

One of the most evident reasons why your Russian Blue may be changing its eye color is its age. Once you notice that their eyes start to have specks of green, no matter if it’s a small dot or large specks, then it means that they are growing older. This can happen every two weeks up to every two months until they reach the adulthood stage of their life or until their eyes become pure green.

2. Your Russian Blue May Have Underlying Health Issues

If the eyes of your Russian Blue changes into colors other than green, then it’s probably the best idea to take them to the vet as soon as possible. This is because there’s a high chance that your cat is dealing with certain underlying health issues.

So, when do Russian Blue cats’ eyes turn green?

Starting from either yellow or blue eyes, a Russian Blue will start to transition into its distinct green eyes at around four months old. The process is a little slow since it will begin with a faint green ring. It will become fully bright green once they become adult cats, that is when they reach ten months old.

Keep in mind that not all Russian Blue cats will have green eyes. Some will maintain the eye color they have from birth, while some may stop at only having green rings.

How to Fix a Wobbly Cat Tree? [Step by Step Guide]

How to Discipline a Bengal Cat?

Why Does My Maine Coon Cry at Night?

Do Bengal Cats Sleep With You?