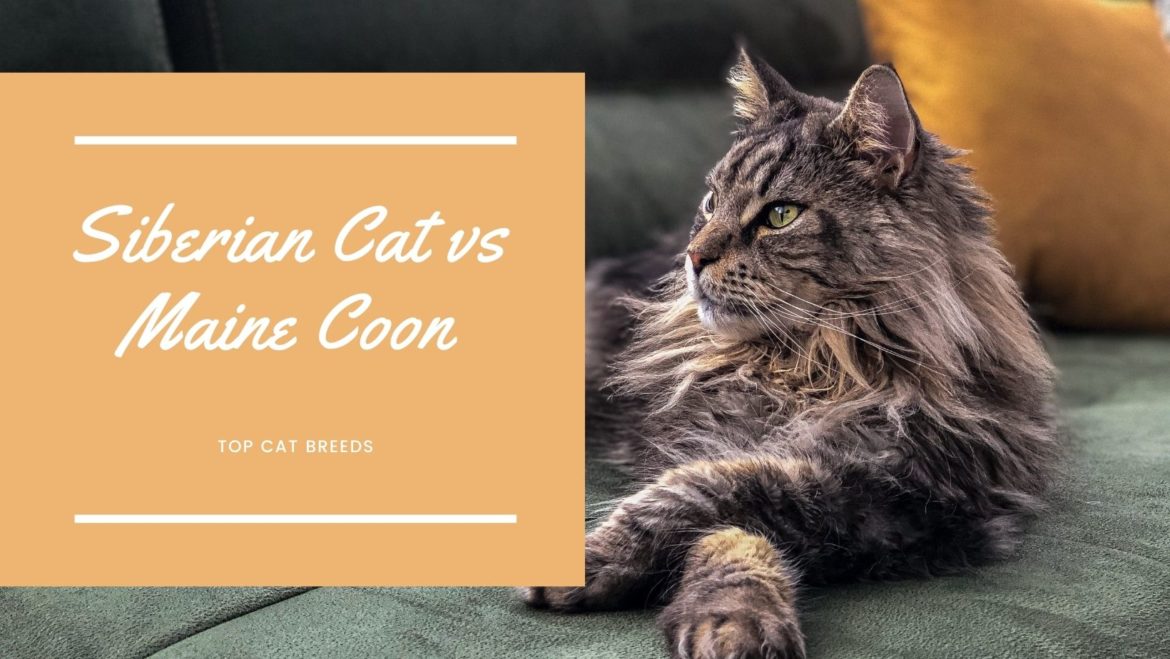 No matter if you’re a beginner or an expert in terms of recognizing cat breeds, we can’t deny the lingering confusion when setting the distinction between Siberian cats and Maine Coons. Unlike in other breeds, one glance won’t be enough to fully understand their differences.

Still, is it important to differentiate between Siberian cat vs Maine Coon? Of course. This is most important if you’re choosing which breed to take care of, or if you’re working in the field of feline care. Since this can get a little confusing, we’ll talk about everything you need to know in the following sections.

Before we go into deeper details about Siberian cat vs Maine Coon, let us first give you an overview of each breed below:

The Siberian breed is semi long-haired forest cat that originated from Russia. It currently has the title of being the national cat of the country. This explains why, along with their relatively larger size, they have a very thick fur coat that surrounds their body. This allows them to keep up with the extremely cold weather in the said country.

Siberian cats are probably one of the most famous breeds when we talk about large cats. They aren’t exactly humongous because they’re actually in the medium to medium-large scale. However, compared to others, you’ll find Siberians a lot greater in size.

The said breed is also one of the oldest since it has been around for several centuries. However, it only became an official and standardized cat breed in the 1980s.

Maine Coons, just like Siberian cats are distinct in their size and fur coat. It originated in Maine, another naturally cold country. This is why they also have thick layers of fur to protect them from the climate.

The exact date when this breed actually started is unknown. This makes the breed an ancient group among felines.

Even so, some speculate that this breed came after Siberian cats because of a theory stating that Maine Coons are the result of a Siberian and a domestic cat breeding. Some experts don’t believe this, though. The only sure thing is that the official mention of Maine Coons dates back to the 1860s, the same era as Siberians.

Read also: How to Take Care of a Maine Coon – Your Guide

Now, let’s talk about the appearance of Siberian cats and Maine Coons. This aspect is where most people often confuse the said breeds with each other.

Siberian cats have large bodies that are accompanied by the thick layers of their fur coats. They are also characterized by their round face shape and friendly-looking eyes. If you’re familiar with both Norwegian cats and Maine Coons, then you can imagine Siberian cats to look like the breeds’ combination.

Unlike others, Siberian cats come in a variety of colors. You can see them in white, black, brown, silver, blue, red, orange, gray, and so much more. They can also come in solid colors, combinations, patterns, spotted, and other multi-color variations depending on their genes.

Eye-wise, the Siberian breed usually has blue distinctively round ones, but some of them may still have a pair of copper, golden brown, or green.

Just like Siberian cats, Maine Coons are known for their relatively larger size when talking about felines. They also have thick fur coats, which makes them look bigger than they actually are. Even so, most people see the breed with more of a muscular build rather than the usual fluffy one. This is mainly because of their seemingly square-shaped faces and highly noticeable cheekbones.

In terms of coat colors, Maine Coons also come in several. These include white, blue, black, cream, red, and a lot more others. These can also come in a full solid color, patterned, spotted, bi-color, tri-color, and other possible combinations. The possibilities are basically endless when it comes to the coat’s appearance.

For the eyes, the breed at hand is mostly known for its green eyes. Most Maine Coons have different shades of greens for their orbs. Still, some of them can have gold, copper, or blue eyes.

Read also: 10 Family Cat Breeds Perfect For You And Your Family

In this section, we will focus on the personality that you should expect from Siberian cats and Maine Coons. For a disclaimer, the personalities that we will discuss are simply generalized behaviors from the said breeds. There are still a lot of external factors that you should take into consideration when fully deducing a feline’s overall personality.

That said, here are the things that you need to know.

Siberian cats are very extroverted. They love to play, they’re always high in energy, and you can expect them to get very affectionate with people and other animals very easily.

You may also find them acting a lot like kittens because of the fact that they tend to mature later than other cats. For reference, a Siberian cat only reaches the adulthood stage when it turns about five years old, whereas other felines only take a year or two.

As per relationships, you’ll be glad to know that Siberian cats live harmoniously with kids, other cats, and other kinds of animals. They like having companions, but they’re not that needy. They’re usually famous for having a lot of patience since they usually wait out until their owner/s has time to play and cuddle. This makes them perfect for those who can’t spend all their time at home.

Maine Coons are also known as “gentle giants” because of their calm and loving personalities despite their size. They’re still playful and kitten-like, but you can expect them to be much friendlier and sweeter due to their nature.

Maine Coons are also overly curious. You will usually find them moving around until they feel satisfied with where they are, what they’re looking at, and likes. This quality helps them to easily adapt to different places and lifestyles. Similarly, this is also the main reason why they can get extremely vocal whenever they need something.

The breed at hand can handle relationships with people and other animals well. Their gentleness applies to most species, so you won’t have to worry since they will make good family pets if you treat them right. They are also not that needy even if they enjoy constant physical affection.

If you’re new to both Siberian cats and Maine Coons, it’s important that you familiarize yourself with their health state. It involves knowing the diseases and issues they are prone to, what kind of maintenance they need in order to stay healthy, and likes. This is what we’re going to help you with in the next sections.

Siberian cats generally have a strong immune system, which means that there’s a high chance that they won’t encounter health issues in the long run. Although not always, the only common disease that they are prone to be hypertrophic cardiomyopathy or HCM.

Note, though, that some Siberian cats become prone to a number of kidney issues. This usually happens when their genetics and family line has a history of the said health concerns, or if they aren’t getting the nutrition that they need.

As for the average life expectancy, they can live up to 10 years. Some can even survive up to 15 years old or longer, considering that they don’t face accidents, injuries, and internal issues.

Maine Coons are considered hardy breeds. This means that they don’t need a lot in maintaining good health. It’s pretty much like having a strong immune system, like that of a Siberian.

The difference, however, is Maine Coons are generally more prone to several health issues, such as obesity, HCM, hip dysplasia, and a few spinal issues like atrophy. Kidney issues are also a given, along with eye-related concerns.

Hardy breeds like Maine Coons usually live for a long time. The average life expectancy for them comes up to around 14 years. This is why you can expect a very healthy Maine Coon to survive past 15 years old.

The Price Of Siberian Cats vs. Maine Coons

The price of an average Siberian cat starts at $1,200. Basically, the higher the quality of the cat, the higher the cat’s cost will be. For the middle level of qualities, the maximum that you can expect is $2,000. For those that come from premium quality and a renowned family line of Siberian cats, the average price range is from $2,500 to $4,000. Some also sell the breed for about $5,000.

On the other hand, Maine Coons cost around $900 to $2,000 for those with average qualities. This breed has a relatively lower price since you can cop a purebred for as low as $400. However, expect the highest price to reach around $7,000.

Keep in mind that no matter the breed, the price will vary depending on a lot of factors. Apart from the quality, a breeder will also take other aspects, such as the cat’s appearance (rarer colors are priced higher), official cat papers, the breeder’s reputation in the field, the purity of the breed, and possibly even the place where they got the cat from.

Which Cat Is Larger: A Siberian Or A Maine Coon?

Maine Coons are comparatively larger than Siberian cats. Their body weight usually ranges from 8 to 25 pounds, while the latter comes up to around 7 to 17 pounds only. Moreover, a Maine Coon can grow as high as 40 cm, and as long as 81 cm, whereas a Siberian cat can only reach a maximum height of 30 cm and a length of 46 cm.

What Are The Differences Between A Siberian Cat And A Maine Coon?

The main (yet minor) differences between Siberian cats and Maine Coons are as follows:

Still, Siberian cats and Maine Coons don’t have a lot of difference. More often than not, they have almost the same appearance in terms of coat colors, similar playful and kitten-like personalities, and extroverted nature.

Are Maine Coons Related To Siberians?

Although Siberians and Maine Coons look very much alike, you can expect that they have a lot of differences when it comes to other aspects. These include their personalities, maintenance, cost, and even the minor details in their appearance, such as their face shape. They also have different origins despite both being able to withstand cold weather.

Still, there is no “better” breed when talking about Siberian cat vs Maine Coon. If you’re wondering about which will be better to have as a pet, then you have to depend on your preferences and capabilities in taking care of a cat.

Learn More Whether Can You Bathe a Nursing Cat?