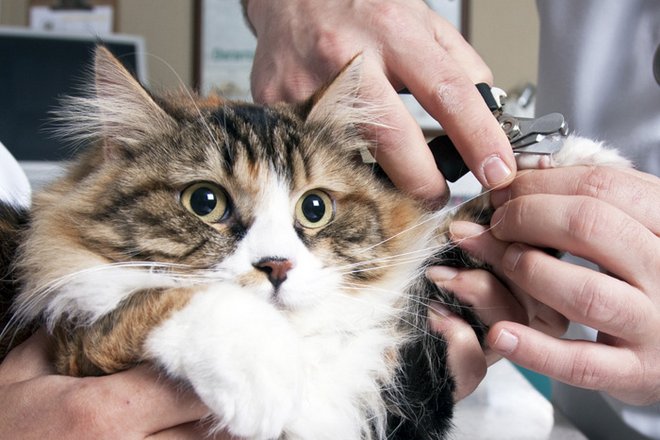 The cat’s nails are an essential part of their body. It is used for hunting, climbing, self-defense, kneading, scratching an itchy part of their body and a lot more. Cats have the ability to groom their nails by means of scratching it on any surface to get a decent length. As the cat grows and matures, they need to get assistance on how to trim their nails and groom themselves.

The best way to trim cat nails safely is a way to show your affection. As a cat owner, it is important that you know the proper way of trimming your cat’s nails. You will be able to conserve money, time and energy if you will do it all by yourself. There are tips and tricks on how the nail trimming to be successful. This article will teach you how to do it.

How Often Should You Trim Your Cat’s Nails?

How rapid the growth of the cat’s nails depends on the cat species. On average, you may need to trim their nails at least twice a month. During the first few trimming sessions, you will notice your cat’s resistance as soon as they see the nail clipper. Make them feel that they won’t get hurt by it and make sure to give them treat after.

When they formed positive sensations about the nail clipper, you can expect that the trimming process is easier and faster. Don’t let their nails grow long because it would affect the way how they walk and climb and the longer their nails, the harder it becomes so trimming would be a bit difficult.

Why Do Cats Need Their Nails?

When a cat lives outdoors, their nails serve as their survival tool to protect themselves from their predators as well as to attack their prey. Even though the cat has the ability to bite and swallow its prey if it doesn’t have nails to hold it aggressively, then it is useless. However, when your cat is indoors, their nails might not be used for catching prey, but they can use it during play and exercise.

When there are two or more cats in one place, scratching of their nails on any surface like the tree or scratching post leaves a message to other cats around. Scratching their nails would usually mean that they are imposing that they are territorial. In the wild, they make use of their paw pad’s scent and brush it over to their territory so that when another cat comes in, they would know that somebody owns the place.

Outdoor cats used to climb in different heights such as in trees. When they climb a tree, they use their nails to scale up to ensure that they won’t just glide down or fall. Their nails play an important role in their walking abilities that gives additional mobility, without it, they can just go to a limited place.

The nails of the cat serve as their defense mechanism tool. If they don’t have nails, they can be powerless in situations when their life is at stake. They can use their nails to swat other cats or animals and they also use it when they are upset by humans.

You are like trimming a baby’s nails when you trim the cat’s nails because their nails are fragile. It is advisable to make use of a trimmer that is made specifically for cat’s use. The nail clipper should be of the right sharpness so you can clip the nail in just one press. It is also preferred to make use of a nail clipper that has a long handle with a rounded blade.

The use of treats after trimming your cat’s nails is helpful to stimulate the pleasure area of their brain. Treats help you get hold of your cat especially if it is hesitant to go near you holding a nail clipper. They tend to be more submissive to follow your directions if they know that they will be rewarded soon. If they are used to being rewarded after the trimming session, your cat will see trimming positively.

Steps In Trimming Your Cat’s Nails

Step 1: The first step is to hold your cat and situate it in a comfortable place as long as it is on your lap. When your cat is in place, give a treat. It is ideal to give your cat a treat every step so they won’t get bored and withdraw within the process. To avoid overfeeding, cut the treats into small pieces.

Step 2: Since your cat’s back is rested against your chest area, hold your cat’s paw gently using one hand while slowly extending its nails. Your pacing should be slow so that your cat will not take it aggressively. If you are now holding the cat’s paw with your one hand, give the treat directly in its mouth.

Step 3: Observe the cat’s nails. Check the area where the nail has pinkish markings from the clear one. The one that has pink marks is its quick. If you are not a pro in trimming their nails, make sure to leave a few spaces before the quick to make sure that their nails will not bleed. As a guide, only cut the sharp and pointed part of the nails.

Step 4: Give your cat a treat after you finish trimming each nail. The force that you should have in pressing the nail clippers depending on the softness and hardness of their nails. Younger cats have a softer nail while older cats have harder nails.

Facts About the Cat’s Nails

What is the Claw and Nail Disorder?

The claw and nail disorder is one of the known problems that involves the cat’s nails and claws. This disorder encompasses two infections which are the Paronychia and the onychomycosis. Paronychia refers to an infection in the cat’s nail bed that leads to an inflammation of the tissue that surrounds the nails. Onychomycosis is described as the main infection that affects the nail.

The claw and nail disorder is due to different factors such as bacterial or fungal infections, low nail immune system, brittle nails, problems with their hormones, birth disorders, and wounding the nail bed that triggers an infection called Neoplasia. When your cat suffers from nail disorder, for sure it will cause pain and will affect their mobility. Take your cat to the veterinarian for an immediate cure. How the claw and nail disorder is treated depending on the diagnosis where the disorder comes from

It is where you would hold your cat under your arms as if you are running for it over in a field. You are like hugging your cat, its back is rested on your chest. You should be in the sitting position while they are circled in your arms. This is the most common position used when you trim a cat’s nails because the cat is securely in place and that you can easily control the force needed to clip their nails.

As the name implies, you’ll resemble how a burrito looks like by wrapping the cat into a blanket or a towel while trimming its nails. The function of the blanket or towel is to help the cat to be calm and so that they are restrained from withdrawing. When the cat is wrapped around, it cannot see the actual process of trimming so their anxiety and aggressiveness are avoided. You will also have the confidence in trimming their nails if the cat is just relaxed.

This is the most comfortable way of holding a cat if you would trim its nails because you are just like holding a baby on your lap. The cat’s belly and legs are facing forward while its head is resting on your arms. It is easier to control your cat is it resist if it is in this position.

Learning how to trim the nails of your cat is a way to keep them healthy and active. Trimming their nails should be done on a regular basis to avoid other health issues and immobility.

10 Family Cat Breeds Perfect For You And Your Family

Effective Ways on How To Convince Your Parents...