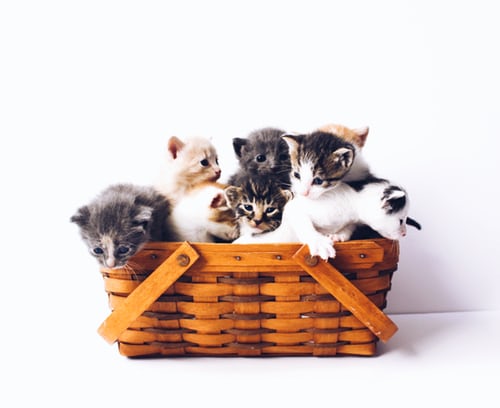 Newborn kittens depend entirely on their mother, much like human babies. While mama cat is supposed to produce enough milk to feed her brood, sometimes her tired body can’t keep up. A proper diet may help her make milk, but you may need to feed her baby yourself in some situations. Mother cat not producing milk? What’s the reason?

Your cat’s been breastfeeding, and she’s delivered her kittens. Now the time has come for her to take care of her kittens, but she won’t feed them for some reason. Maybe she’s completely rejected one or more of her kittens, or you’re just not sure she’s properly nursing. What is to be done by the cat owner concerned?

Most of the time, mother cats give birth to kittens and take care of them with little or no human intervention. However, there are moments when nature does not take over. That’s when humans need to step in and provide assistance.

There are several potential scenarios for a mother cat refusing to nurse her kittens. In certain cases, the mother cat will start nursing and then stop. Or, in the first place, a mother cat can never begin nursing. Some or all of the kittens may be rejected by the mother cat. Not only will she refuse to nurse the kittens, but she may also ignore them completely or act aggressively when approached by the kitten.

If something like this happens, the first move should be to take the mother and kittens to the veterinarian as soon as possible. If you can figure out why a mother cat doesn’t feed her kittens, you may have a better chance of getting her to start feeding them. Or you may need to step in and take care of the kittens yourself. Either way, your vet can help you out. Remember: when you’re going to the vet, make sure you’re taking the mother and all her kittens along, no matter what they do or don’t look sick. Here are the reasons behind a mother cat not producing milk.

1. The Illness Of The Mother Cat

If a mother cat has a health condition, she may be unable or unable to nurse her kittens. In some cases, she’s not going to produce enough milk for her kittens. Or, a problem such as mastitis can affect her ability to nurse comfortably.1 Dehydration and malnutrition will also affect the supply of milk. Any health conditions that cause your cat to feel ill will render her unable to nurse her kittens. Even if the mother cat seems to be safe, it’s better to take her and the kittens to the vet right away if she’s not going to be a nurse.

2. Kittens Are Ill Or Deformed

A mother cat may detect or suspect a health problem in one or more kittens and may refuse to nurse that boy. In an instinctive effort to protect the other kittens, she may put the sick kitten out of the nest. The problem may be an apparent congenital disability, a significant disease, or something more subtle. This can happen, however, even though there is nothing wrong with the rejected kitten. Don’t try to bring the rejected kitten back in the nest. This is unlikely to be successful and will stress that the mother will lead her to reject more kittens, maybe even the entire litter. Instead, bottle-feed and keep the rejected kitten warm while you make plans to take mother and all kittens to the vet while soon as you can.

3. The Big Litter Of The Kittens

Some litters can be so big that the mother doesn’t have enough teats to feed all her kittens. It may also not produce enough milk to feed everyone. The mother may favor the stronger and reject the smaller, weaker ones. Do not bring the rejected kittens back in the nest again. Mother and kittens should see the vet as soon as they can. Rejected kittens should be bottle-fed and kept warm.

Quite young cats are also not mature enough to be good mothers. They may also lack energy reserves to produce milk since they are still developing themselves. A female cat can be able to become pregnant as young as four months of age. In most cases, she and her kittens are still too young to survive. If you have a young cat who has rejected any or all of her kittens, you’ll need to step in and help. Take them to the vet to be checked and speak to your vet about how best you can support the mother and the kittens.

At the end of the day, some cats are just not very maternal in nature and do not make good mothers. If this is the case with your cat, it should not be raised in the future as this trait can be passed on to its offspring.

If the mother cat doesn’t feed her newborn kittens at all, it’s important to get both the mother and the kittens to the vet as soon as possible. In the meantime, you need to find a way to feed the kittens because they need to eat every few hours with the same frequency, depending on their age. This is normally done with the bottle-feeding kitten formula. It is also important to provide maternal care for newborn babies. Keep them warm and encourage them to urinate and defecate.

The most widely available type of kitten formula is called KMR, which stands for ‘kitten milk replacement.’ KMR comes in cans or cartons and is available for purchase in most pet stores and on websites selling pet supplies. There are also other brands of kitten formula available. Stop cow’s milk or human baby formula as it is not nutritionally suitable for kittens and can lead to health issues and even death if fed for a longer period of time.

You will use a tiny kitten feeding bottle to give the kittens the formula. Many people, however, feel that the eyedropper works best at first. Newborn kittens will need to be bottled once every two hours. Gently warm the formula and feed around one teaspoon (5 ml) of each kitten. This number is for the kittens that have just been born. Ask your veterinarian about the right amount of food to feed as the kittens grow.

If your cat is expecting kittens, it’s a good idea to have some kitten food on hand in case your mother has trouble breastfeeding. If you don’t end up in need of a formula, you can still use it later. Adding kitten formula to moist kitten food will aid as kittens begin to turn to solid food. Or donate the kitten formula to a pet shelter or rescue organization.

A. The Best Diet

Providing a good diet to your precious purring feline is essential for optimal milk production. Throughout her job, and until one day later, she might not be interested in eating. However, you can also have food and freshwater at your disposal. When she’s breastfeeding, Fifi can eat as much as four times her usual amount of food, says vet Dr. Dawn Ruben. Because she needs more calories to feed her furry offspring, feed her a high-quality kitten diet or specialty food made specifically for nursing cats.

Kittens nurses every two to three hours. If your baby has a big litter, her body may not be able to keep up with the demand, and you may have to help her out. Constant crying is a sign that pint-sized furry felines may be hungry, and mama just doesn’t produce enough milk. Your local pet store has the supplies you need to help Fifi feed her young. You will need kitten milk replacement formula, known as KMR, as well as kitten bottles and 3 mm syringes. Some kittens feed better on a syringe than on a small bottle. If you are uncomfortable, your veterinarian can show you how to feed your kittens.

You can start weaning your kittens as early as three weeks of age, explains ASPCA. Place the kitten milk substitute formula in a shallow dish, allowing the tiny felines to learn how to lap it. Once they find out how to drink from the dish, make the cat gruel with their food. Mix the milk substitute with dry or wet kitten food until it has a soft, moist consistency. You’re going to have to feed your fuzzy family a few times a day, but they’re slowly starting to rely on solid food versus mother’s milk. By 6 to 7 weeks of age, kittens should be able to eat solid food, but if they seem to be struggling when they eat, you may want to moisten it for a little longer.

If your nursing kitty doesn’t eat more than 24 hours after delivery or if it doesn’t seem to produce milk, contact your vet immediately to rule out any issues. Blockages in the nipple ducts or other medical issues can hinder her ability to nurse. To improve milk production, if you don’t have an appetite, you might be able to entice her to eat by making some of her own kitten gruels or mixing wet food into her normal dry food. Often the powerful scent of moist food causes the feline to feed. If you end up having to feed your new lovable pals in a bottle, never give them cow’s milk because it can make their fragile digestive tract worse and cause diarrhea.

Once you’ve seen your veterinarian and addressed any issues, you may want to try to get the mother cat to nurse again (only if recommended by your vet). If the mother cat is either unable or unable to feed her kittens, continuous bottle feeding would be required. Kittens should be bottle-fed kitten milk for at least the first four weeks of their life. You can start adding kitten food around the age of three weeks, and, as soon as the kitten eats on its own, gradually begin to reduce the amount of milk you give.

Know that your vet is the best source of knowledge when it comes to kitten care. Ask your vet for information on the amount and frequency of feeding, how to help the kittens urinate and defecate, and how to keep them clean and warm.

3 Important Tips on How to Protect Leather Couch from Cats

Are Heating Pads Safe For Cats? Let’s Find Out!