How Far Do Neutered Cats Roam? 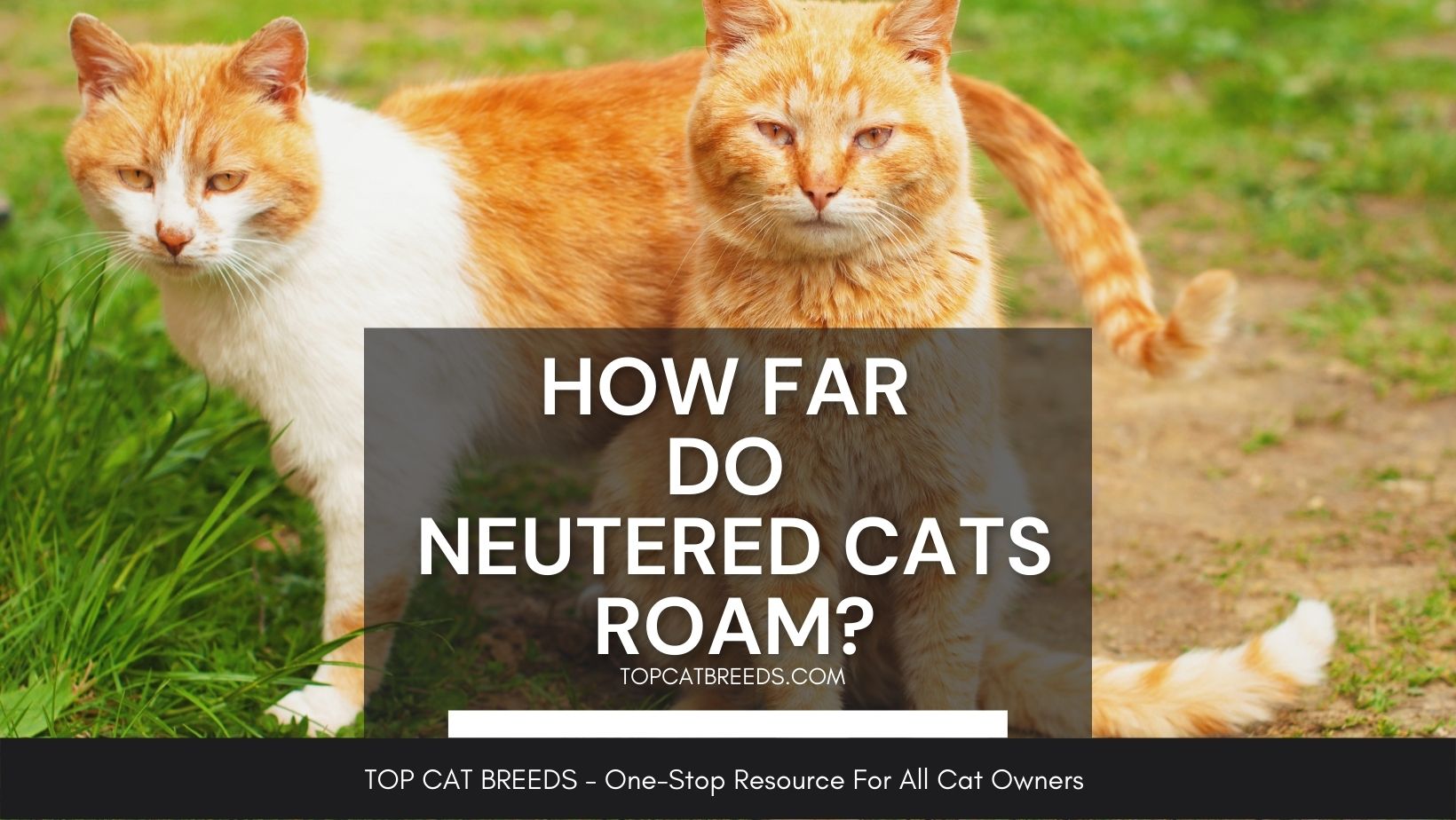 This is a common question that owners of neutered cats ask when their pets somehow manage to go and stroll on their own outside. This can be worrying, so it’s understandable if the first thing that you want to know is how far they can go.

The good news is: Neutered cats usually don’t go far from their own homes, say around 650 feet max within the proximity of your current area. It will still depend on several factors and the possible reason why they roam, but you can expect to return sooner than unneutered cats.

To better understand the relationship between neutered cats and roaming, then read on to the following sections.

Why Do Cats Roam?

Since cats are naturally curious and instinctive by nature, there are a lot of possible reasons why they may roam around the area. Below is a list of some of the things that your feline may be dealing with:

They Are In Heat

For cats who aren’t neutered or spayed yet, they are very likely to roam around the neighborhood if they are in heat. They want to look for another feline to mate with, and they usually won’t return until they can soothe their bodily needs. It’s another reason why you should definitely look into neutering your cat as soon as possible.

The Cat Wants To Explore Their Environment

It is a part of a cat’s strong instincts to explore the environment they are in. They want to ensure that they are updated with everything outside of their own territory, so they roam around and keep track of their surroundings. This can be their way of making themselves feel safe and secure in their homes.

The Feline Wants To Hunt

Cats are natural predators. If they get a strong desire to hunt, then expect that they will start to roam around and look for vulnerable prey like birds, rats, and likes. If you live near a body of water, then they may even try to catch fish. This is most common for domestic cats who are used to enjoying the outdoors.

You Got Your Cat Angry Or Stressed

Although cats aren’t usually seen as emotional and sensitive animals, they can run away if their feelings get hurt. It can be temporary or permanent but expect that they will take their time to roam around the area until they feel good enough to come back home. This is also the most common case when it comes to neutered cats.

Read also: Will Neutering Calm My Cat? Find Out Here!

You’re Dealing With A Curious Feline

Cats may also go and explore outside if they can get overly curious about every little thing. If they see something new to their eyes, such as prey, new animal, toy-like things, etc., they are bound by their instinct to find out what it is and how it works.

What Should You Consider When Neutered Cats Roam Around?

There is no one answer as to how a cat behaves after it’s neutered. This goes the same for how far they will roam around, what their attitude will be, and how long the possible healing time is.

That said, what are the factors that you should consider when your neutered cats roam around the area? See the following list:

You can neuter your cat as early as four months old. This is still under the kitten phase, so if they still roam, it’s best to try and find them immediately, especially if they still lack necessary skills like socialization, hunting, defense, etc. This will be easy since they can only roam for around 100 feet or even less if they’re cautious enough.

Adult cats, on the other hand, can usually fend for themselves even if they roam, so they are most likely to go further and reach more than 650 feet.

Healthier, leaner cats tend to roam far from their homes. This is common for regular cats that don’t have any underlying condition before or after they are neutered. Weaker cats, on the other hand, including those in the senior phase usually only explore near places because of their bodies’ capabilities.

The Place You’re Living In

If you’re living in a city, especially crowded ones, your cat is less likely to roam far since they already know that it’s dangerous. Neutered cats living in this area may not even reach half of 650 feet in this case.

For those who are living in rural areas, however, expect that your neutered cat may be comfortable exploring far distances.

If your cat is naturally curious, instinctive, or an outdoor lover, going as far as 2,000 feet will be a piece of cake. Alert neutered cats, on the other hand, are more likely to stay near their homes or comfort zones. The overall personality of your feline friend will affect how they will explore the outdoors.

What Are The Risks For Neutered Cats Roaming Around?

Although it’s fairly safer for neutered cats to roam around since they don’t have any mating tendencies anymore, there are still risks that you and your cat should look out for, like the following:

No matter if your cat has attitude issues or not, they can get pretty territorial. If they encounter other cats around the area, there is a chance of them being involved in catfights, hence resulting in bodily injuries. This does not yet include the possible vehicular accidents they may encounter along the way.

If we’re talking about a neutered kitten or simply a cat that isn’t used to its surroundings yet, you should be aware that there is a risk of them getting lost on their way back home. You should be most worried about this since this plays a big part in whether they can return home or not.

Read also: What To Do When Your Lost Cat Returns Home?

If your cat roams around for too long, there is a possible risk of starvation and dehydration due to a lack of necessities. Most felines can work their way to avoid this, but inexperienced felines may find a hard time keeping up with their needs.

Do Cats Run Away After Being Neutered?

If you’re wondering if cats run away once they are neutered, it will highly depend on their attitude.

Some felines may choose to run away if they felt stressed during the neutering process. Sensitive cats who also didn’t like the changes that happened are also prone to this behavior.

On the other hand, cats that don’t fit the above instances don’t really run away. In fact, most neutered felines tend to like being at home more.

This means that, in general, it’s very rare for neutered cats to try and run away, either just for a while or good. It’s because they don’t already feel the need to look for a mate or engage in territorial-related behavior. Observation after neutering is still important to prevent unlikely circumstances.

How Far Do Neutered Cats Go?

Now, to answer “How far do neutered cats roam?”, expect a distance range of around 650 feet to 2,000 feet. Contrary to how it may seem, the distance is not that far, so you can rest assured that there is a low chance for your feline friend to get lost along the way.

There are some felines whose roaming area doesn’t exceed 650 feet, which is common for indoor cats with specific breeds. Domestic cats, however, tend to go further, especially if they are used to exploring the outdoors.

Note, though, that it’s uncommon for neutered cats to reach a thousand feet away from the house. Still, it’s important that you consider several factors like its gender, the reason for roaming, and likes.

So, how far do neutered cats roam?

You’ll be glad to know that the range of a neutered feline’s roaming area comes up to only 650 to 2,000 feet. The exact distance will depend on their age, behavior, gender, and more. Although the range may still seem like a lot, it’s significantly less than a regular, unneutered cat, which starts at 850 feet at the very least.

Whichever, it’s still best to prevent your cat from wandering around, especially if you are not living in a very cat-friendly environment. Doing so will help you prevent them from several health risks.

Why Do Cats Eat Mice Heads? – Reveal The Mystery