Does Cinnamon Keep Cats Away? 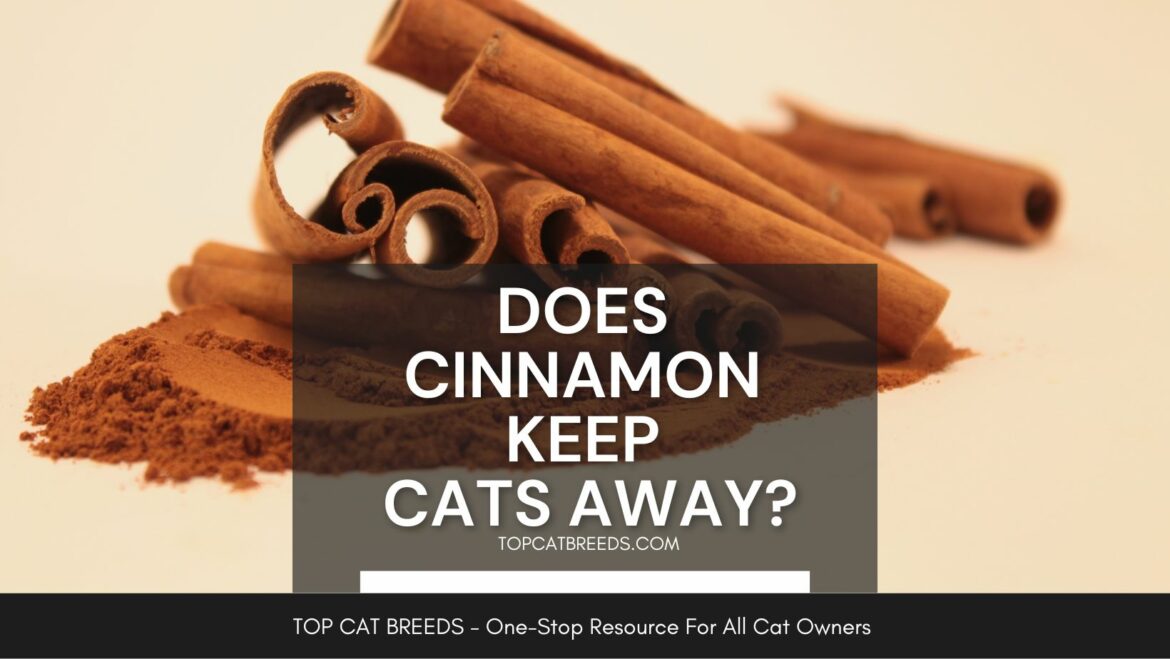 Sometimes, you just do not want cats around. Sometimes, it is necessary to keep felines away from your property. For instance, if your new yard is full of cat feces, or your prized vegetables are being ravaged by a stray cat, you need to keep them away.

But the question is, does cinnamon keep cats away? Is it effective? Read on to find out!

Does Using Cinnamon Works For Keeping Cats Away?

Unlike humans, cats are able to sense a vast amount of information in their environment through smell. This is believed to explain why they stick their noses into people’s stuff.

Cats have developed a unique sensory organ that they use to recognize other animals and find their territory. This organ also helps them identify dangerous substances and objects.

The scent of cinnamon overpowers a cat’s sensitive nose, which is why they are not attracted to cinnamon. This is the primary justification why people avoid giving their cats sticks of cinnamon.

So, if you are worried about what your cats might do to your backyard, try using cinnamon to keep them away. However, this is not an animal-friendly solution.

Although cinnamon is not considered a toxic substance for cats, it can still have harmful effects if consumed in large doses. Consuming strong spices can cause irritation to the bowels. It can also trigger allergic reactions in cats, especially those with sensitive skin.

Placing cinnamon sticks around your garden is not an ideal way to treat your cat. It can also upset the neighbor who found the animal in pain. Fortunately, there are effective repellents that can be used.

Other Alternative Solution To Repel Cats from Your Garden

We love cats, but we also do not want to have our garden pooped on. Fortunately, there are plenty of ways to keep them away that are both effective and animal-friendly. You do not need to start spraying water on a cat’s face or throwing objects at it to keep it away.

Although cinnamon is not the best option, other natural and effective ways to keep cats away are scattering various food and plants around your garden. A strong smell can be off-putting to felines, so use these to your advantage.

For most veterinary medicine, the best option is to use ground coffee beans, as they are less likely to be ingested than cinnamon. Some other options include citrus fruit peels, garlic, other fruit peels, strong plants, and pepper.

Unfortunately, this method can also lead to the loss of the scent due to the rain. This is why it is important to keep spraying.

Put some ground covers and motion detectors into your garden

Cats typically hide their feces in the ground. So, just cover the place to make it harder for them to do their business. If you have a green thumb, you can plant some dense flowers to make it look more appealing. Also, wood chips and bark can be used to provide a strong layer of protection against ravagers.

Moreover, you can add motion detectors to your yard to deter potential thieves. These devices, which sound a high-pitched alarm whenever a person walks by, can be used against other garden pests such as rodents and dogs. It is found to be the best option for keeping cats at bay.

Although cinnamon and other similar products can deter cats, there are other ways to keep them away. For instance, by clearing out all of your clutter and holes, you can prevent rodents and other live prey from coming into your garden.

Place a fence around

This is the most time-consuming and drastic way to keep cats out of your yard. However, it is also the most effective. You can add an additional layer of wire mesh fencing around your garden to keep them at bay.

Follow these steps daily or after cleaning to get the best results.

How Does Cinnamon Affects Cats?

Cats avoid getting attracted to cinnamon because its strong and spicy smell can overpower them. However, some cats actually like to eat and lick it.

This is not allowed since it could cause vomiting, diarrhea, coughing, and even allergic reactions in some cats. A small amount of this can do little to harm a dog, but it can still irritate its skin and oral cavity.

Similar to ginger and nutmeg in terms of aromatic properties, cinnamon has a distinct woody and spicy note that is commonly used in baking and cooking. It is grown in Sri Lanka, Indonesia, and China and is also an ingredient in coffee and tea.

Using cinnamon extract and oil can be dangerous for cats as it can cause severe damage to their mouths, eyes, and skin. The compound in the oil, coumarin, can prevent a cat’s digestive system from breaking down, which can result in allergic reactions.

Does the essential oil of Cinnamon really bad for felines?

The website of the Pet Poison Helpline stated that essential oils could be toxic to cats. They said that the concentrated nature of these oils could cause them to become ill.

Is there another spice that can keep felines away from your garden?

Cats would not be able to find their way to the garden or the border of your yard if you have dried spices, such as lavender, rosemary, and dried mustard, which have odorous solid compounds. Fruit peels, on the other hand, can keep felines away if they are placed near plants and cupboards.

Besides cinnamon, there are other smells that cats hate. Some of these include mint banana plants, citrus, citronella, and dirty litter boxes.

Does Cinnamon Scent Bad For Cats?

Although cinnamon is considered to be non-toxic to cats, it can still be toxic at certain levels. This is particularly true if your cat is exposed to higher concentrations of essential oils.

Sometimes, cats are too curious to handle. This is why it is important that you keep them away from various objects, such as the kitchen counter and the couch. Cinnamon has a powerful and overpowering aroma that can keep felines away. However, it can also be toxic to cats if they eat large amounts of it. This is why it is better to use a spray deterrent instead.

Cats are known to hate strong and pungent smells, and this is why many people believe that they dislike the smell of cinnamon. This is why it is very essential that people use this product to deter felines from entering their gardens.

Why Does My Cat Swipe at Me When I Walk By?

How to Compost Cat Litter?