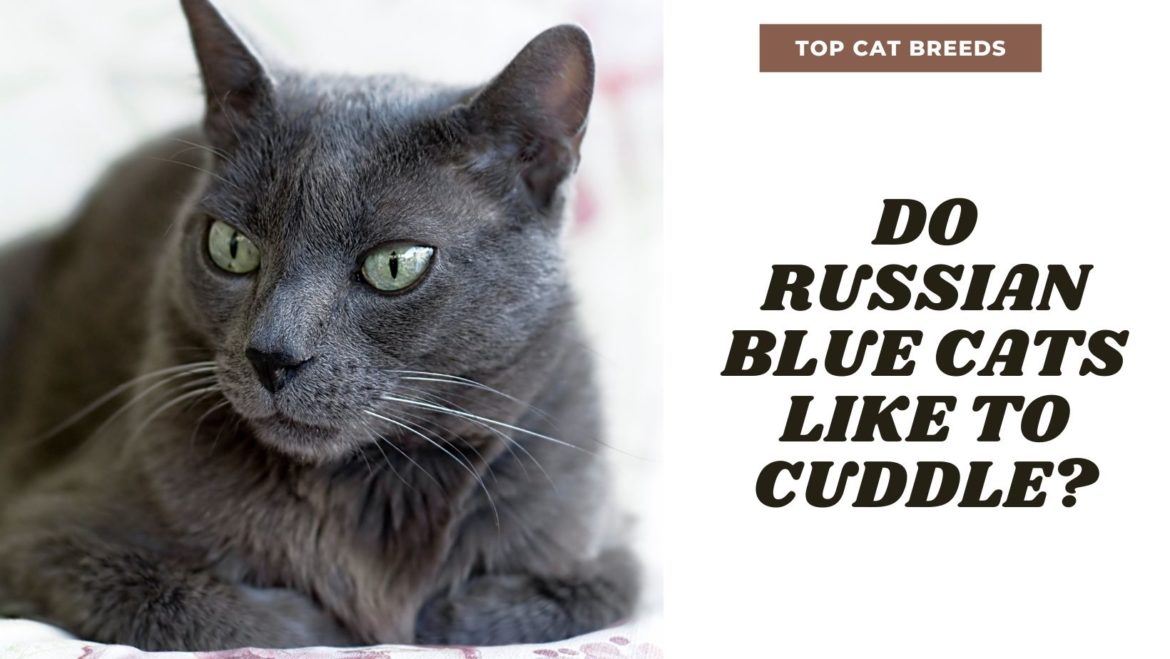 Russian Blues are known to be very sweet and loyal to their owners. The breed has built a reputation around its gentle temperament both around people and animals.

However, like any other feline, you should know that Russian Blues have a specific way of showing love. Do they display the same level of physical affection as Burmese and Siamese cats do, or are they like Persians who aren’t big fans of being touched?

That said, let’s talk more about how Russian Blues are when it comes to being affectionate. More specifically, let’s answer, “Do Russian Blue cats like to cuddle?”

The truth is, although there is a misconception about cats being too distant and aloof towards physical affection, Russian Blues are the actual opposite. They enjoy being held, they like being cuddled, and they react positively to physical touch in general.

Still, keep in mind that there are still other factors to consider when initiating physical affection with Russian Blue cats. Here are some:

Cats usually show signs if they don’t want to be touched, so make sure to observe their behavior and stop whenever they start to react negatively. It’s also important to give them time to warm up to new people and surroundings.

Russian Blue cats are known to be very affectionate. However, it will take time before they can fully be comfortable in showing this side of them. No matter if you got them as a kitten or as a full-grown adult, expect that they will be shy at first. They can also be overly cautious since they’re not that familiar with you yet. There are even cases when they may react aggressively if touched without their consent.

Don’t worry, though. As long as you don’t force or hurt them, they will warm up to you in no time. When this happens, you can expect them to initiate affection whenever you’re together.

It’s actually easy to tell when a Russian Blue cat doesn’t feel like socializing. However, do you know how they show affection? Let’s look at the following sections:

Because Russian Blues are generally affectionate, you can expect them to initiate physical touch every so often once they already feel close to you.

This includes randomly jumping on your lap, rubbing their heads on your leg or arm, asking for pets or belly rubs, and other similar behaviors. More often than not, they will want long hours of exchanging physical touch with their owners. They can also do this to the other people they like.

Keep in mind that your cat’s love for physical touch will start slow, so don’t worry if they don’t immediately do major acts of affection.

2. By Asking Their Owners To Play

Russian Blue cats are big fans of playtime sessions. Still, because of their overly cautious nature, they won’t engage with you just because you’re offering a toy or you’re interacting with them energetically.

That said, once they start to ask you to play or just go into a full-energy mode, that’s when you know that they are starting to open up to you and show affection. Make sure to answer your feline’s invitation if you have the time since there’s a chance that they will feel upset if you don’t.

Some signs that your Russian Blue wants to play include jumping or pouncing towards you, doing nothing but staring at you or their toy, running around the area, scratching on certain things like your furniture, and more. Some will even bring the toy they want to play with to you.

3. By Sleeping Beside Or Close To Their Owners

No matter when it comes to playing or cuddling, there are cats that just don’t like to be touched, and it’s perfectly normal. This applies even if their breed is popular for being sweet and affectionate in nature. This is because, just like humans, animals can also have their preferences.

However, this doesn’t mean that your cat won’t show you physical affection. If this is the case for your pet, then they will still show you love by sleeping beside you. Some will also sit and lie near your position or just someplace where they can see you.

The funny yet sweet thing about this is they will literally not care about where they position themselves. If you’re a cat owner yourself, then you probably already know that keyboards, tables, piles of papers, and clothes, are all perfect spots for them.

Have you experienced or even heard cases where a cat brings things like dead mice and birds to their owners? Believe it or not, this is another way for cats to show their affection. They treat the things they bring you as gifts. It can also mean that they’re teaching you how to hunt because they look at themselves like mother-like figures.

No matter how disgusting this is, you should actually feel flattered if it gets to this level because this means that they already see you as a family. This also means that you have already built a strong bond with each other.

Russian Blue cats are not known for being clingy or needy. They’re just the right mix of independent and affectionate. However, there are times when they feel a strong bond with a person, and they tend to want to get their attention all the time.

That said, once they feel close enough, they will show affection by constantly trying to seek your attention. This can get a little annoying because it will be common for them to constantly meow or scratch furniture until you finally notice them. You don’t have to worry about this if your cat actually uses attention-seeking as their love language. You can just place them on your lap and pet them if you’re a little busy.

Will My Russian Blue Bond With Children?

Because Russian Blues are generally calm in nature, you can rest assured that they will be good companions for children. As long as the child is gentle in interacting with the cat, you will have no problem letting your child and cat bond with each other. On the flip side, tables can take a complete turn when we’re talking about rowdy kids.

That said, it’s just right that you teach the child the proper ways how to be with cats. This includes how to hold the feline, how to pet it, as well as the things they shouldn’t do. If you want to keep it safe, then it’s best to leave the cat with older children like pre-teens instead of toddlers.

Read also: What Are The Best Cat Breeds For An Autistic Child?

What Is The Temperament Of A Russian Blue Cat?

Russian Blue cats have a sweet and gentle temperament. They’re shy at first but will gradually transition to affectionate and loving cats over time. The breed is also independent, so it’s rare for them to act too needy. They’re curious, mostly quiet, and very smart. Not to mention, they are also usually well-behaved with moderate energy levels. All these qualities make them great family pets.

Although the answer will still be a case-to-case basis, you can usually expect the said breed to be open to cuddles and other types of physical affection.

Just note that it will take time before they feel comfortable enough to let you. Some Russian Blue cats may take more time than others, while some may instantly welcome your gestures. It’s important to observe your feline to know exactly what relationship stage you are in. Also, remember to have patience since some felines will definitely be more difficult to handle at the start.

How to Discipline a Bengal Cat?

Why Does My Maine Coon Cry at Night?