Do Ragdoll Cats Eat A Lot? [Find Out More] 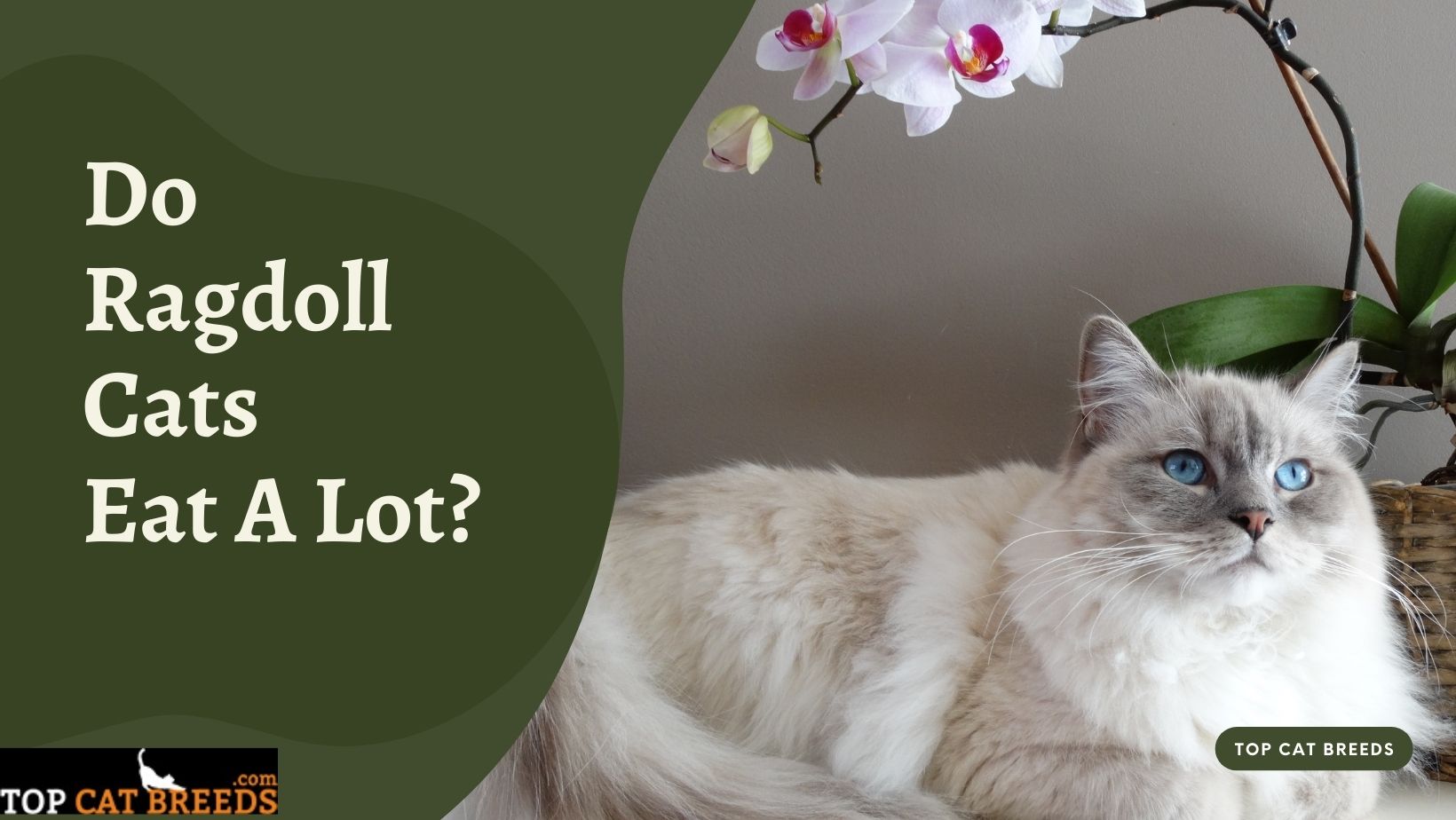 When it comes to cuteness and having a relatively big size for a feline, you can rest assured that Ragdoll cats are one of the breeds that top the ranks. These longhaired beauties were deemed the most popular cat breed in 2019, and you’d probably know why if you own one yourself.

The thing about Ragdolls, however, is they are high-maintenance. They need to get their fur trimmed and groomed regularly. Most importantly, they have to get all the nutrients that their body needs, which is probably the main reason why they eat more meals than the average feline.

That said, do Ragdoll cats eat a lot? What do you need to do to ensure that they are eating enough? This is what we’re going to talk about in the next sections.

Why Does My Ragdoll Cat Eat More Than Usual?

Do Ragdoll cats eat a lot? The short answer is yes. It’s normal for Ragdoll cats to eat a lot. In fact, they are known for eating four to six times more than the average cat.

However, this doesn’t mean that they don’t go through changes in eating patterns. Eating little to none at all is usually a negative thing, but keep in mind that there can also be a negative cause when you notice that your cat is eating more than usual.

So, what does it mean when your Ragdoll eats more than usual? Below are some of the most common reasons why:

1. The Cat Is Stressed

Ragdoll cats sometimes show their stress through their eating patterns. There are times when they may not eat at all, or they may eat less than they usually have. In other cases, however, the cat eats a lot more than usual. This becomes their coping mechanism, and a method to release their bodies’ tension.

You’ll know that this is the case if your cat recently faced changes, such as living in a new environment, meeting a new person or animal, and likes.

2. The Ragdoll May Be Pregnant

If you noticed that your Ragdoll ate more than usual sometime after mating with another feline, there’s a chance that this happened because they are already pregnant. This can also happen if they recently got out of your home and strolled around the area.

For owners who aren’t planning to have mother Ragdoll cats, make sure that you look into neutering them as soon as possible. Doing so will help you prevent your feline from facing issues like eating too much, having an unwanted litter, and other health problems.

3. Your Feline May Have Adapted Irregular Eating Patterns

If you aren’t consistent in feeding your cat, may it come to the interval, time schedule, or amount, expect that your Ragdoll will form irregular eating patterns sooner or later. If not managed, it can transition into an eating disorder or any other digestive issue.

That said, it’s important that you pay close attention to how you feed your Ragdoll. Avoid making unnecessary changes, especially when it comes to the number of times that they eat if you’re not going to make it a daily habit. Healthy transitioning is also essential. Make sure that if you’re going to modify anything from their diet, you do it little by little until they can fully adjust to it.

4. You May Have Changed Their Food Recently

Sometimes, the only reason why a cat may eat more than their regular appetite is that they like the food. This is the most valid cause if you recently switched their food to another type. It’s also an indication that they are reacting positively to whatever you modified in their diet plan.

Try to observe your cat if they are displaying the behavior with delight or not. If it’s the former, then you have nothing to worry about.

5. The Cat Is Starting To Age

Ragdoll cats tend to eat more as they age. This is most especially when they are still in the growing stage, that is, below 10 months old. It is normal and is not something that you need to go to a vet for. However, you may want to start switching up to giving them more meals with higher calories to keep up with their bodily changes.

6. There May Be Health Issues Involved

If your Ragdoll is eating more food and is displaying negative reactions like lethargy, vomiting, or constant hunger, the best thing to do is to get them checked up by a professional. This is because they may already be dealing with health issues, such as fleas and parasites, diabetes, and other issues that may be targeting their intestine and appetite.

How Often Should Ragdoll Cats Eat?

Generally, a regular adult Ragdoll cat should eat four times a day. This is mainly because of their size, which larger than average. Some may need more, which is up to six times daily, while some will need less. It will largely depend on factors like their age, weight, and if they are in need of any kind of special diet, though.

Keep in mind that apart from the number of times that a Ragdoll eats, it’s also important to take note of how much each serving has. If you give too little each time, feeding your cats four to six times still won’t make any sense since they still won’t get the proper amount of nutrition they need.

How Much Should My Ragdoll Eat?

Here is a table that you can refer to if you want to know how much you need to feed your Ragdoll cat:

Do Ragdolls Need A Special Diet?

Because Ragdoll cats have higher requirements when it comes to nutrition, they need a special diet to ensure that they will get exactly what their body needs. They are also considered hypercarnivores, which means that they also need more meat in their diet. Consequently, it also means that they can’t survive on dry kibbles alone.

What Food Is Best For Ragdoll Cats?

It can be overwhelming to come up with a diet plan for your Ragdoll cats. To avoid this, you should have an idea about what food is good for them depending on their current nutritional needs, body condition, and age.

Another one of the most important factors to take note of is the feeding schedule. Of course, you can’t give them the same food over and over. Their daily meals should be different from their treats, and vice versa.

For a clearer view, below are the things you need to know:

The go-to daily meal of every cat owner is dry cat food or kibbles. Regular ones, however, won’t do for Ragdolls. If you’re going to proceed with this, you have to find a dry food that is specifically formulated for the said breed. One good example is the Royal Canin Adult Ragdoll.

Wet food is more costly, but it’s a healthier choice for Ragdolls. If you plan on sticking to this for their daily meals, it’s best to start while they are still kittens. You may want to avoid transitioning from dry kibbles to this since your cat’s body may try to reject it. Furthermore, in choosing a wet food, make sure that there are no artificial ingredients in its content.

For Ragdoll cat owners who have time, effort, and money to spare, raw food is probably the best choice around. This is the most suitable since cats find it easy to digest, tasty, and of course, nutritious. It usually involves feeding raw meat, mostly chicken and fish, raw egg, and virgin coconut oil. Some pet owners also add bone broth to the mix.

Once in a while, you should consider giving treats to your cats either as a reward or an act of love. You can opt for store-bought cat treats since it’s a convenient way to do so. Alternatively, you can also opt for table food treats, such as small pieces of unsweetened salmon and beef, boiled eggs, and fruits like apples and bananas.

Read this too: Can Cats Eat Cranberries?

Both choices are good. The only thing that you have to consider is which option your cat will like since the breed can be a little picky.

Read also: 5 Best Calming Treats for Cats on a Budget

So, do Ragdoll cats eat a lot?

Ragdoll cats eat a lot. They get hungry more often, and thus, they need to have more meals in one day in order to satisfy their appetite. Some of the main reasons include their body size, fast metabolism, and high nutrient requirements. You have to consider these, along with factors like the age and weight, to know how much food to give.

However, there are cases where a Ragdoll may eat more than usual. If this happens, observe them see if you’re dealing with any kind of issue or if they’re simply hungry.

What Will Happen if My Cat Ate Styrofoam?