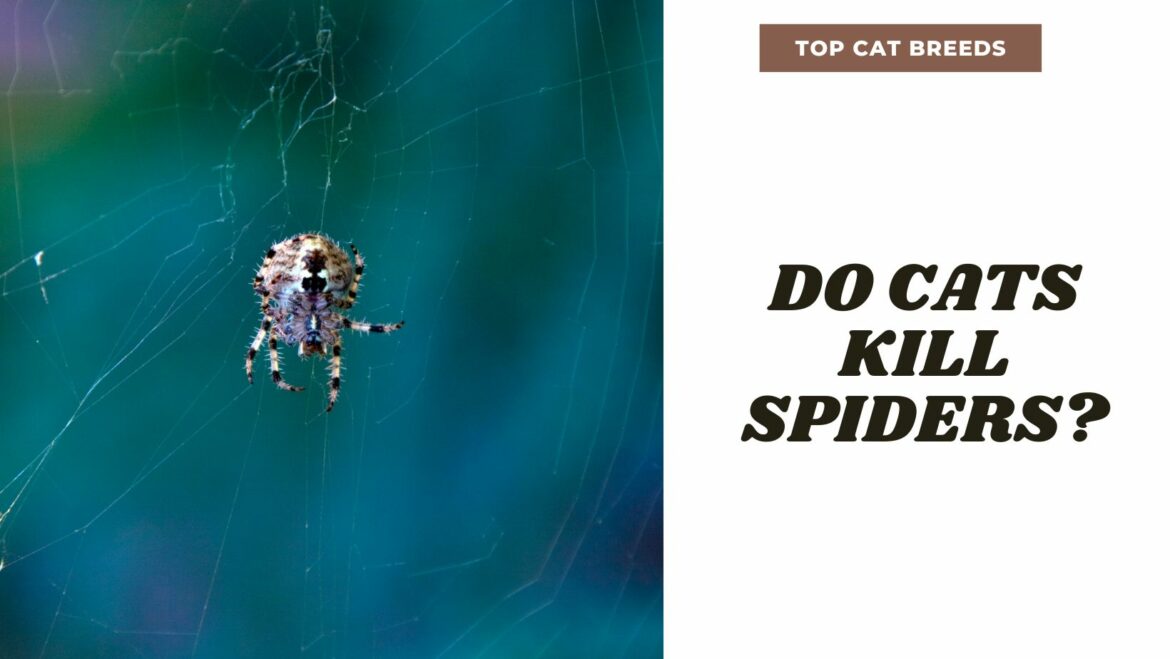 Do cats kill spiders? After a long day at work, you suddenly notice that your cat is acting strangely. While sitting on the couch, you notice that they are pouncing and patting something on the ground. You then realize that it is a spider. As you get up to investigate, your thoughts immediately start racing. What if the spider bit my cat?

Cats are known to hunt and kill spiders due to their instinct. They are also known to eat them whenever they find them. Since you have confirmed that your cat can help remove these creatures from your home, you might have other questions about why they do this.

Cats are known to hunt and kill spiders. Their instincts are to seek and attack anything they believe is threatening their inner lion. A cat will go after anything, including spiders. It is usual for cats to chase and pat these small insects around, which can lead to your pet’s death.

Some breeds of cats are less likely to exhibit their instincts. For instance, the Himalayans and Persians are known to ignore small creatures and sleep away. Here are some of the other reasons why cats exhibit this kind of behavior:

They Are Natural Hunters

While cats and spiders are both known to be predators, cats are in the food chain higher than spiders. Spiders are mainly known to attack insects that get caught in their web. Even predatory animals that hunt small vertebrates, like lizards and birds, don’t try to kill cats.

On the other hand, cats may think that a spider is a tasty treat. These pets are known to be hunters, and they can usually find anything they want in their environment, such as rodents and small birds. They can also catch squirrels. In addition, studies have shown that cats have a significant impact on the ecosystem around them.

Although domesticated cats are known to be driven by their desire to hunt, it’s not uncommon for them to eat the insects and other animals they hunt. For instance, an indoor cat might turn spider and insect parts into treats if they come across them inside.

They Are Playful By Nature

Besides being hunters, cats also have a curious side. They may not always kill venomous or hungry spiders because they want to play. It is no surprise since cats are much bigger than most household spiders. If you’ve seen a cat playing with a spider, you know they weren’t in a hurry to eat it.

Even though cats can eat small animals, such as spiders, they usually bat them with their paw instead of using their jaws. While dogs are known to rely on their jaws to eat, cats are more likely to be concentrated on the long game. When a cat tries to kill prey, it first evaluates its weakest area. After each strike, it attacks the creature repeatedly and quickly kicks it out of range.

While the cat may be planning on eating the spider, it seems that it prefers to play. Cats are known to chase various objects, such as toys and strings, and they often catch them. Spiders are also a good fit for them since they look like they’d be fun to play with.

Spiders are a high source of taurine, which cats can get mainly from wild food sources. Taurine is a water-soluble amino acid so meat-based pet food may need more. You can find taurine in other pet food, and cats should supplement their adult food with it to ensure they get the nutrients they need.

Spiders are known to have high taurine levels, which is sulfurous. This amino acid is found in their venom and can be used to inject their prey. Even non-toxic household spiders have venomous fangs. It’s not surprising that cats would not require a boost in taurine with a protein powder, as spiders are a part of their diet.

What If A Poisonous Spider Bite Your Cat?

Spider bites are often life-threatening and require immediate medical attention. The Black Widow and the Brown Recluse are some of the most toxic spiders that can affect humans. A cat’s small size can allow the venom to spread rapidly and cause severe side effects.

Even if you are unaware of the symptoms of a toxic bite, it is essential to seek medical attention immediately. Spider bites can be incredibly painful for cats, but they can still recover with medical intervention.

Several cases of cats surviving such attacks include one from a black widow. Since the toxins work quickly, it’s vital that owners immediately seek medical attention. Also, since cats are much lighter than humans, the venom can travel much faster.

Although a household spider is not considered dangerous for cats, it must get past its hair and thick skin to bite them. It is because cats are usually on high alert and are sensitive to certain sounds and smells. If you’ve tried to sneak up on them, you know it will be tough.

Although most spider bites won’t cause any pain, keeping an eye on your cat if they get bitten by a poisonous spider is still crucial. The effects of different types of spider venom can vary, and the bite on a cat is very similar to what a person would experience if they were bitten by one.

Here are some of the spiders you should watch out for:

The tell-tale sign of a brown recluse bite is its growth. The bites start small, and the surrounding tissue begins to break down. It then turns white or grey, and the skin around the bite begins to die. It’s essential to monitor your cat’s wounds for signs of this condition.

Leaving an untreated brown recluse spider bite can be life-threatening. Most owners will immediately notice the wound that the bite creates, and they should seek medical attention for their pet.

The black widow spider can be toxic to cats. It can cause muscle spasms, paralysis, and cramps and also cause respiratory distress, which may be fatal. You may notice your cat lying stiff on the floor if this type of spider has bitten them.

According to Dr. Georgina Ushi, you should immediately take your cat to a veterinarian if they have any signs of being bitten by a black widow spider. She noted that supportive treatments, such as intravenous fluids, can help decrease the severity of the condition.

A hobo spider bite can be life-threatening if left untreated, similar to the brown recluse’s bite. Experts state that routine wound care can usually treat a hobo spider bite in cats, but leaving it untreated could lead to infection.

Although they are not considered dangerous to humans, pet cats should be aware of the risks of getting bitten by a spider. The venom of these insects can be toxic, and it can cause severe vision damage if it gets into your cat’s eye.

Do cats kill spiders? Cats kill spiders for various reasons, such as playing with or accidentally killing them. Although they are a great source of protein and taurine, they probably won’t fill your cat’s belly.

Although you may find it gross, it’s not a big deal if your cat is allowed to eat spiders. Cats are not known to be particularly vulnerable to poisonous insects, and even if they do get bitten, they should recover quickly and get medical attention.

Letting your cat kills spiders can be a positive, as it keeps these pests out of your house. Some people find it beneficial, especially if they are not fond of these creatures.

Can You Keep A Litter Box In Your Bedroom?

Is Plumeria Poisonous to Cats?