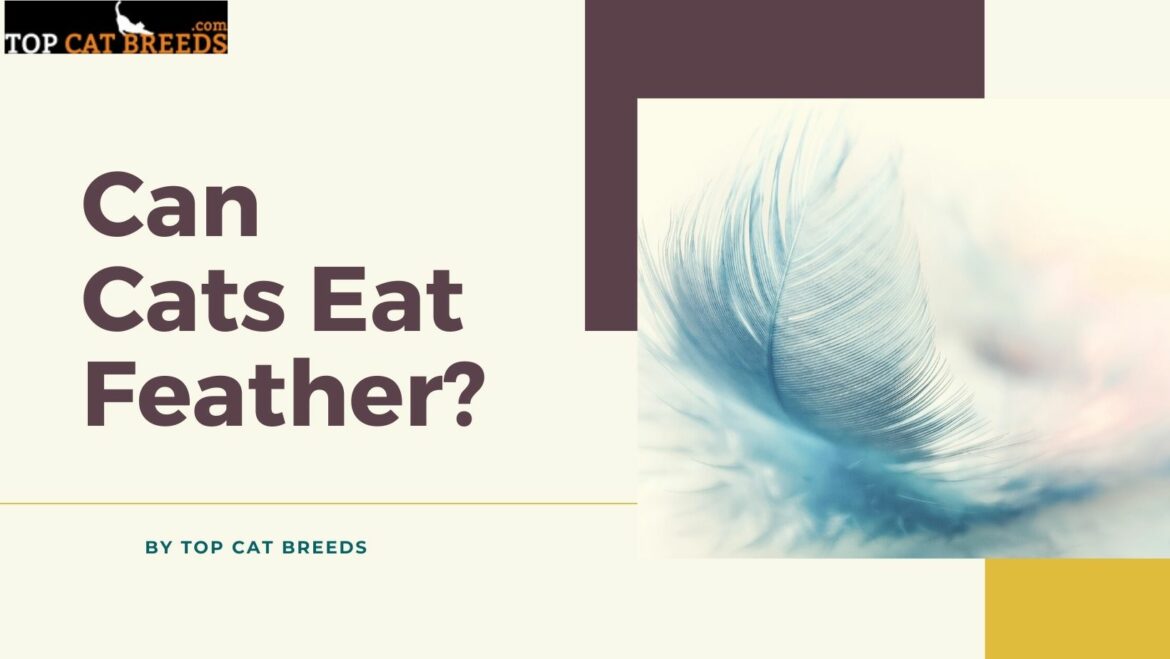 Can cats eat feathers? Cats are curious and often try to eat something they come across due to curiosity. However, they might face some risks if they eat a feather. One of these risks is that they might suffer from gastrointestinal issues.

This article will answer your questions about the safety of feathers for cats and why your pet is eating them.

Although cats can’t eat feathers due to their inability to digest them, they can still produce obstructions similar to hairballs. Also, some feathers used in crafts and arts have hazardous chemical properties. These fragments can cause digestive issues and pose a threat to their health.

Although it is not always possible to prevent cats from chewing on feathers, it is possible to try and prevent them from doing so. If you see them doing so, you can do everything you can to stop them. If you think a feather cat toy is your pet’s following toy, you should be fine finding one. Due to how popular these toys are, some pet supply stores offer them, but you can also find them at craft stores and flower shops.

Although feathers may seem like a simple toy, they are very beneficial to your cat as they can give its exercise and a fun way to engage with you. Cats can benefit from regular physical activity as it helps them maintain muscle tone and relieve tension and boredom.

A feather cat toy is a fun treat for your cat, and it won’t hurt to play with it. But you must hold it, so it doesn’t eat or chew. You can animate the toy in a way that will cause it to dance, fly, and jerk realistically, and you must put it away after play has concluded.

What Happens When Cats Ate Birds With Feathers?

It’s common for cats to catch birds at some point, and you may notice that they’ll often play with the feathers in their mouths before killing their prey. Cats are used to dealing with fur and feathers, and landing on them can create a big mess. Most of the time, cats remove or spit out most of the feathers they catch, though they will consume some if they eat the bird.

Cat toys are another source of feathers. Although some of these toys have vibrant-colored feathers attached, the actual feathers are not real. Large amounts of these can cause gastrointestinal issues, such as vomiting, diarrhea, constipation, or irritation. Artificial feathers can also be hard to remove and stiff, making them unsuitable for cats. The latter is less likely to injure a pet’s gastrointestinal tract than softer bird feathers.

If you think your cat swallowed a feather, you should not panic too much about your cat’s health. Be sure to observe your furry friend constantly if they show unusual behavior or are choking.

A feather has a protein known as beta-keratin. It is the same kind of keratin that forms the claws and beak of a bird. It is not easy to digest, so cats often vomit feathers. It is a natural occurrence for wild and feral cats.

When it’s hard for cats to pass their stomach or digest food, they tend to vomit. If your cat has recently ingested a feather, you must watch for any signs of vomit. It can help minimize the risk of gastrointestinal issues.

Cats mainly eat feathers when they’re hunting or out of curiosity. Birds naturally react to feathers due to their desire to hunt. Their ancestors, wild and feral cats, chased and hunted birds for food.

The natural curiosity of cats toward feathers has resulted from domesticated cat breeds’ fascination with them. It is also the reason why toys made for cats feature feathers. These toys simulate hunting, and the fast movements and textures make them appealing to felines.

Do Cats Tend To Experience Sickness From Eating Feathers?

During an outbreak of Salmonella, which can affect various animals, cats can become infected by eating or catching sick birds. One of the names of this disease is Songbird fever. Although it harms the cats that have it, it can also put people in danger. The infected birds can infect humans with Salmonella even after they have been sick.

Although feathers are in cat toys, they are unsuitable for young cats. They learn by their jaws and often bite and eat anything you put in front of them. A feather can be trapped in one’s stomach or throat and cause severe illness. Although the threat of avian influenza in India is considered low, cats can still get sick.

Is It Safe For Your Cat To Chew On Feathers From Time To Time?

Cats are not good at chewing on feathers as they can’t digest them. The protein found in the barb of feathers is the same substance that forms the beak and claws of birds. Beta-keratin is the reason why cats can’t correctly digest feathers.

Doing so could lead to issues. Beta-keratin does not digest well in cats’ digestive system, meaning either it must be spat back out or passed through in relativity. It means that owners should avoid letting their cats eat feathers in the first instance.

Cats are more prone to consuming things they shouldn’t eat than dogs. Cats prey on various birds, such as the Blue Jay and the Cardinal. In addition, cats have reportedly eaten endangered species, such as the Florida Scrub-Jay and the Piping Plover.

Read also: Why Is My Cat Licking the Walls?

Do Cats Choke On Feathers?

When your cat gets choked, it will most likely panic. If cats are unconscious, you can try to keep them calm by covering them in a towel or blanket to prevent injury. If this isn’t possible, you should perform the Heimlich maneuver to eliminate the choking object.

Can cats eat feathers? Cats should never eat feathers as they can pose a risk to their health. Some possible health issues they could experience include intestinal obstruction, lacerations to the mouth, and choking.

Before you give your cat toys made of feathers, you must supervise them carefully. Also, if you have a hunter or a huntress on your hands, you might have to prevent your cat from falling prey to these birds. Although cats can hunt and consume birds naturally, you should let them play with these toys until they are old enough.

How To Get a Cat To Use a Cat Tree?